Switching from XFCE4 to KDE Plasma

While I use Unity (7.5) and Ubuntu on my main laptop, on my travel laptop I instead use Artix Linux. Recently, I've been experiencing an issue where when I login to the lock screen after resume the device from sleep, I get a black screen.

Rather than digging around endlessly attempting to fix the issue (I didn't even know where to start), I've been meaning to try out KDE Plasma, which is 1 of a number of popular desktop environments available. To this end, I switched from XFCE (version 4) to KDE Plasma (5.24 as of the time of typing). this ultimately did end up fixing my issue (my travel laptop would win a prize for the most unusual software setup, as it originated as a Manjaro OpenRC machine).

Now that I've completed that switch (I'm typing this now in Atom running in the KDE Plasma desktop environment!), I thought I'd write up a quick post about the two desktop environments and my first impressions of KDE as compared to XFCE. 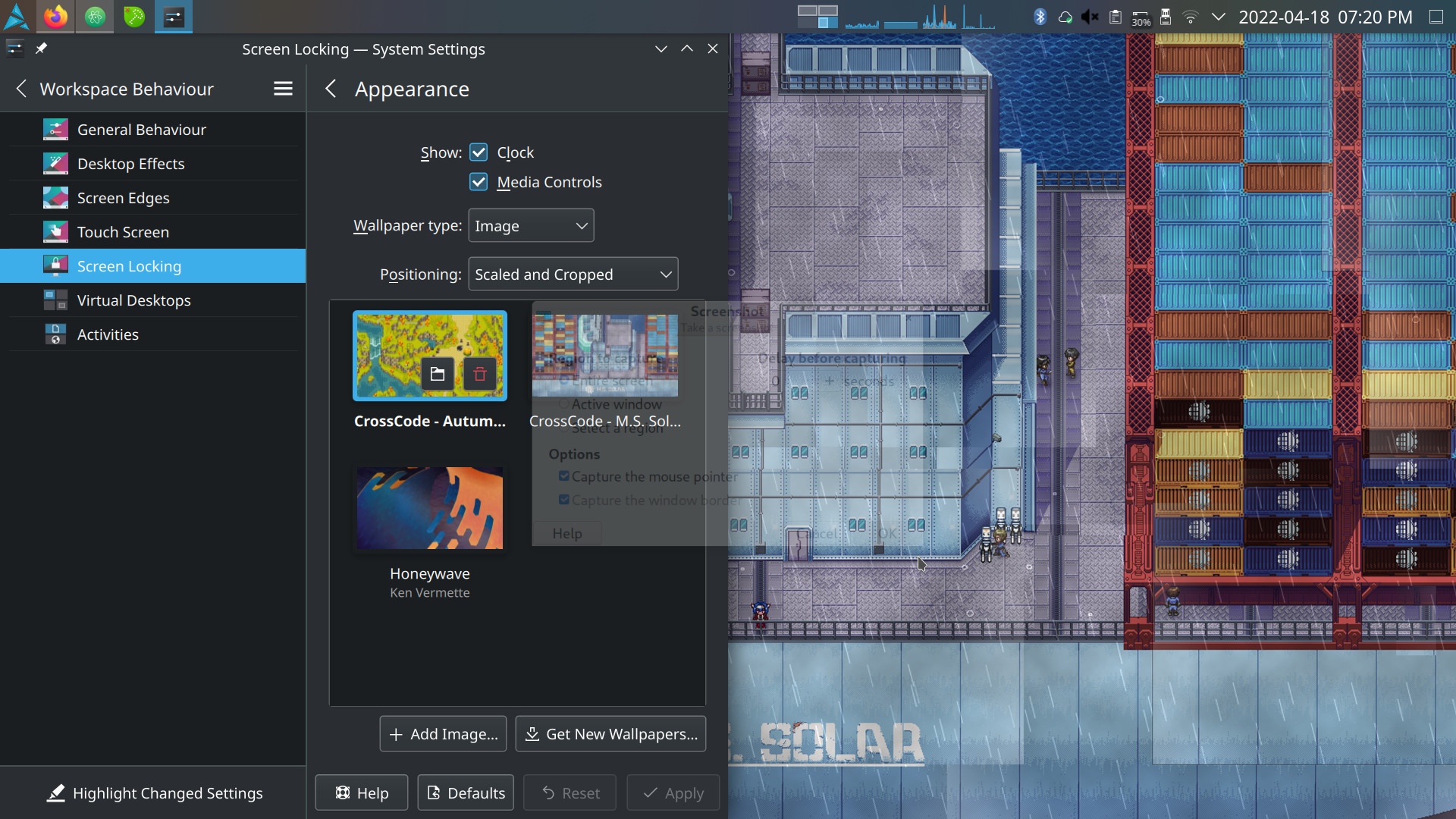 (Above: My KDE desktop environment, complete with a desktop background taken from CrossCode. The taskbar is at the top because this is how I had it configured in XFCE.)

The best way I suppose to describe the difference between XFCE and KDE is jumping from your garden pond into the local canal. While XFCE is fairly customisable, KDE is much more so - especially when it comes to desktop effects and the look and feel. I really appreciate the ability to customise the desktop effects to tune them to match what I've previously been used to in Unity (though I still use Unity on both my main laptop and my Lab PC at University) and XFCE.

One such example of this is the workspaces feature. You can customise the number of workspaces and also have them in a grid (just like Unity), which the GNOME desktop that comes with Ubuntu by default doesn't allow for. You can even tune the slide animation between desktops which I found helpful as the default animation was too slow for me.

It also has an enormous library of applications that complement the KDE desktop environment, with everything from your staples such as the terminal, an image viewer, and a file manager to more niche and specialised use-cases like a graph calculator and a colour contrast checker. While these can of course be installed in other desktop environments, it's cool to see such an expansive suite of programs for every conceivable use-case right there.

Related to this, there also appears to be a substantial number of widgets that you can add to your desktop. Like XFCE, KDE has a concept of panels which can hold 1 or more widgets in a line. This is helpful for monitoring system resources for example. While these are for the most part just as customisable as the main desktop environment, I wish that their dependencies were more clearly defined. On more than 1 occasion I found I was missing a dependency for some widget to work that wasn't mentioned in the documentation. upowerd is required for the battery indicator to work (which wasn't running due to a bug caused by a package name change from the great migration of Manjaro back in 2017), and the plasma-nm pacman package is required for the network / WiFi indicator to work, but isn't specified as a dependency when you install the plasma-desktop package. Clearly some work is needed in this area (though, to be fair, as I mentioned earlier I have a very strange setup indeed).

I'm continuing to find 1000 little issues with it that I'm fixing 1 by 1 - just while writing this post I found that dolphin doesn't support jumping to the address bar if you start typing a forward slash / (or maybe it was another related issue? I can't remember), which is really annoying as I do this all the time - but this is a normal experience when switching desktop environments (or, indeed, machines) - at least for me.

On the whole though, KDE feels like a more modern take on XFCE. With fancier graphics and desktop effects and what appears to be a larger community (measuring such things can be subjective though), I'm glad that I made the switch from XFCE to KDE - even if it was just to fix a bug at first (I would never have considered switching otherwise). As a desktop environment, I think it's comfortable enough that I'll be using KDE on a permanent basis on my travel laptop from now on.