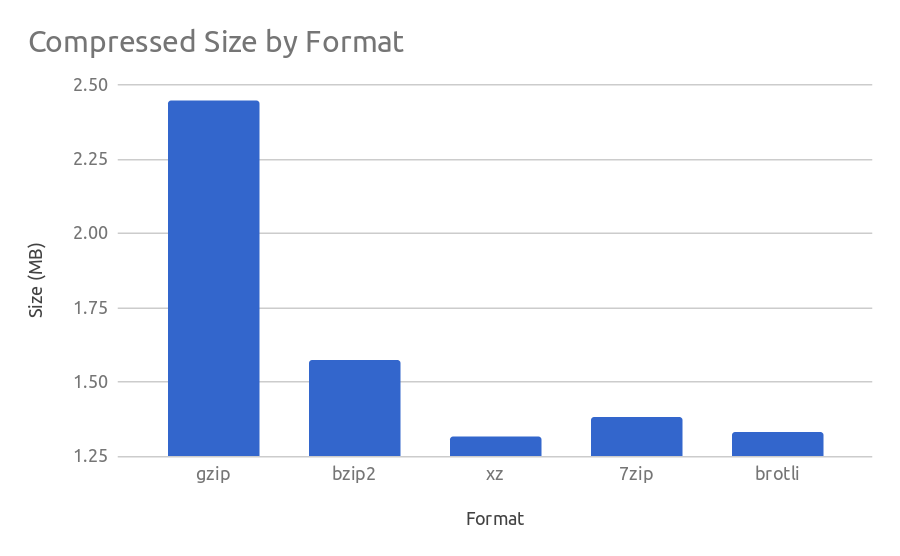 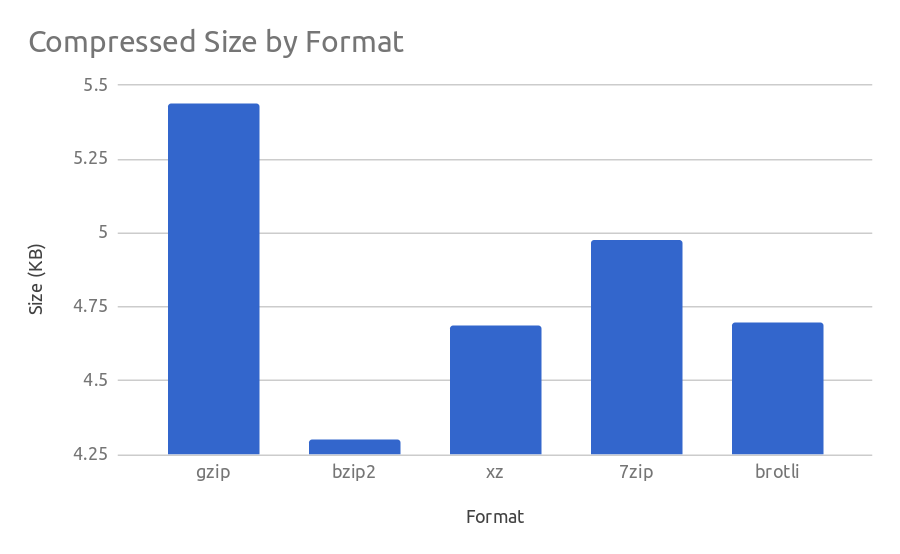 I'm guessing you have tested using the max compression settings available for each compression algorithm?

Consider the following test for brotli on a 12MB json file. (Compression% higher is better)

You may be well served to re-evaluate brotli. With the right compression level, it is very suitable for both online and offline compression. I use 5 for online and 11 for offline.

Yeah, I believe I did use the max compression settings. To be honest, I think I'll probably want to write a much more in-depth analysis post, as I've learnt a lot since I wrote this back in 2018.

Hi, thank you for the test. It would have been nice to have the same graph you did for the size for the time. How much slower was the brotli? Thanks anyway!

Hey, glad you found it useful!

As for Brotil, it's exponentially slower as you increase the filesize to compress. You certainly wouldn't want to be using it for anything above a couple of MiBs, as far as I can tell.

I did a pretty thorough comparison of many of the same compression algorithms, and also compared some alternative binary formats as well. We actually found Brotli a very compelling option for data that we were persisting long-term. We also found that Zstandard worked well for quick compression (beat out GZIP on speed and compressed size). You can see the full results here: https://www.lucidchart.com/techblog/2019/12/06/json-compression-alternative-binary-formats-and-compression-methods/

Wow, that's a pretty thorough test! I would note that compression time with Brotli can explode exponentially as the data you want to compress increases linearly, if I recall correctly.

I guess it really does depend on the data you want to compress as to which algorithm you should use, yeah. Everyone should run their own tests and decide for themselves.

I did a similar test and found 7zip with PPMd instead of LZMA2 to give the best results. Was the fastest on for me as well. You should try that one as well.

Wow, cool! That's a really extensive test. I haven't heard of PPMd, but I'll definitely to check it out next time I need to compress something.

I guess to an extent it depends on the data you need to compress, but with a 64MiB file you'll definitely get some interesting results.

It looked good, but I gave up reading as the background sucks and makes it hard to read. Not everyone has teenager eyes and can simply ignore. I just looked elsewhere as its intolerable.

Hey! I'm sorry to hear that you're finding my website difficult to read, and sorry it's taken so long to get back to you! Have you tried high visibility mode? Just click on the icon 1 to the right of the Facebook icon at the bottom of any page. I've recorded a video showing it in action: https://youtu.be/PicTdtjkfDs

About the background: I have been experiencing issues with it actually. I've found that different people's monitors display it differently, and because my monitor has good contrast, I don't see the problem myself. However, a friend has a terrible monitor, and my website doesn't appear anything like it does on my monitor!

Also, if you use Firefox, the reader view (Ctrl + Alt + R) might come in handy. You can customise it to your liking, changing the font style, text size, background colour, and more.

If you've got any ideas to update the website itself to make it easier to read, I'd love to know.