Encryption demystified: What to use and when

The other day, I found myself explaining different types of encryption, how they work, and what they are used for to someone in my lab implementing a secure system. During this process, I ended up creating a series of fancy diagrams in draw.io - so I thought I'd write it up into a proper demystification blog post.

To start us off here, let's define encryption. Encryption is the process of transforming a given input block of data (of an arbitrary data) using some kind of secret key into a form that is then completely unreadable. Any adversary obtaining a block of encrypted data encrypted with a suitably strong key (and algorithm) is not able to read or understand the data at all - except perhaps infer its original length.

Conversely, decryption is the process of undoing the encryption process with the same (or different, in some cases) key to get back the original data.

For purpose of this blog post, we will assume:

Each of these are fields in their own right that could quite easily take many blog posts to fully explore.

From the perspective of a developer, there are 3 different basic places one needs to aware of. Others certainly exist, but to avoid making this post too long I'll just be covering the following 3:

If there's any other encryption scheme you'd like me to cover, please leave a comment below and I'll try my best to explain it in a separate post.

Not sure on macOS since I don't own one, but I'd be surprised if it didn't. The purpose of device encryption is that when the device is powered off, all data is stored physically on disk in an encrypted format, making it unreadable should the device be physically stolen - thereby protecting all data stored on it.

This is accomplished in a layered fashion. Let's explain it with a diagram: 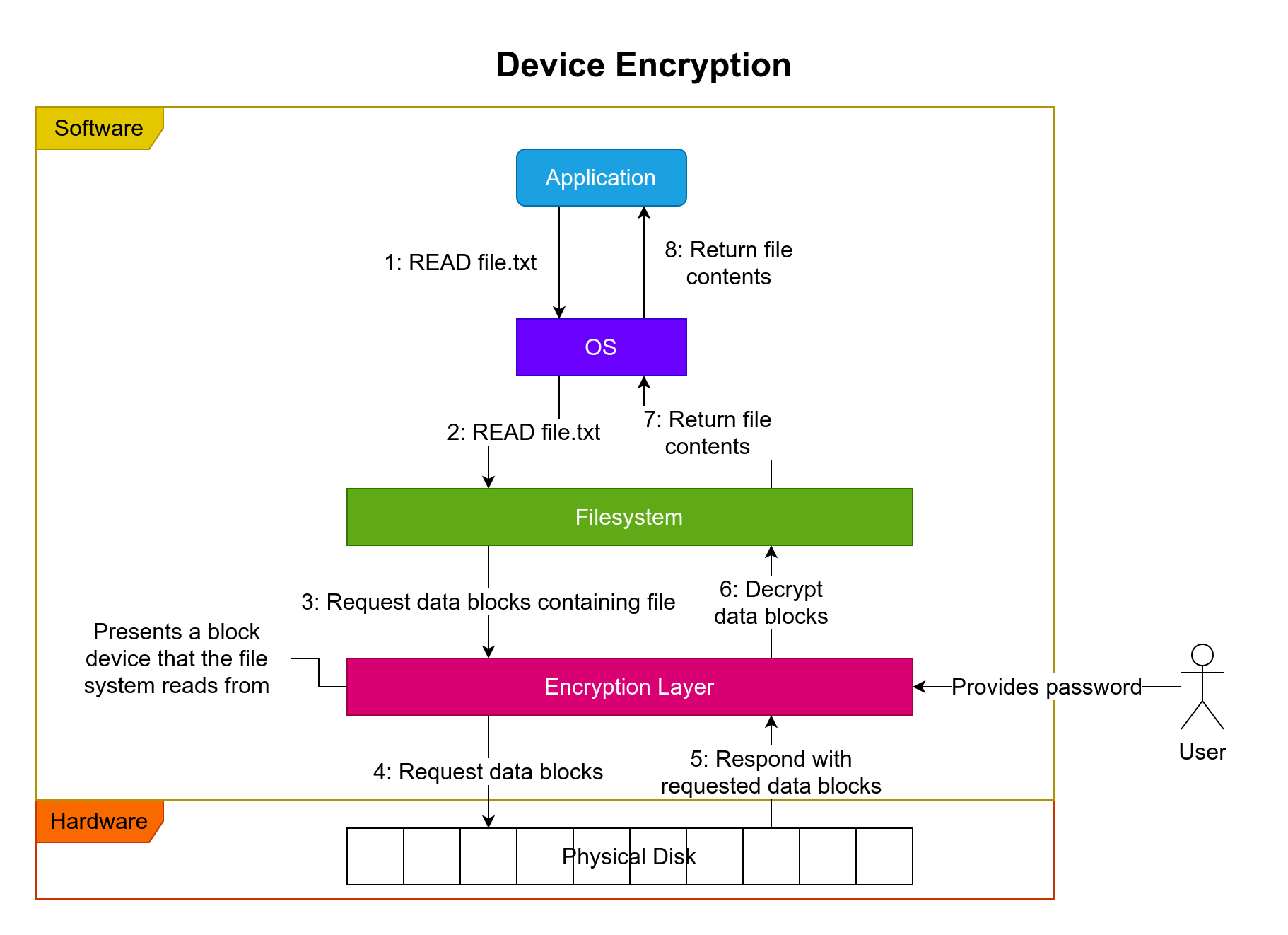 Although they may have different names for it, most operating systems back a concept of a "block device". Such a device is capable of storing a given number of bytes of data. Such devices need not be physical disks: they can instead be virtual. For example, zram presents block devices that store data compressed in RAM.

We can make use of this to encrypt hard drives. An encryption layer such as LUKS on Linux presents a virtual block device to the operating system which encrypts all data written to it before saving them back to some physical disk by which it is backed.

Even operating systems such as Windows (e.g. Bitlocker) and iOS which don't expose block devices in the same way as Linux does, the same principles I've explained here apply.

When the device is powered off, the key that was being stored in memory is wiped (it's stored in RAM, and RAM requires power to store data) and the data is secured.

Another place encryption is commonly encountered in when transferring data to and from remote hosts over the Internet. Since the Internet is untrusted, it becomes rather a problem when one wants to transfer personal information such as passwords, bank card numbers, and location information across the Internet, in that such data could be stolen or modified in transit.

To solve this problem, the Transport Layer Security (TLS) protocol was invented. The purpose of TLS is to provide a secure connection between 2 hosts using authenticated encryption that has the following properties:

Although TLS itself is a protocol that is usually spoken over TCP, because it provides a generic bidirectional pipe through which any binary data can be transmitted and received, it is commonly used to wrap around other protocols to secure them. Examples include:

....and many others. There's a reason it's so prevalent: The most important rule when dealing with encryption and security is to never roll your own. Follow the standards, and use existing crypto libraries for your platform. Don't implement your own, as it's much more difficult than it appears to ensure your system is actually secure.

Here's a diagram of how it works: 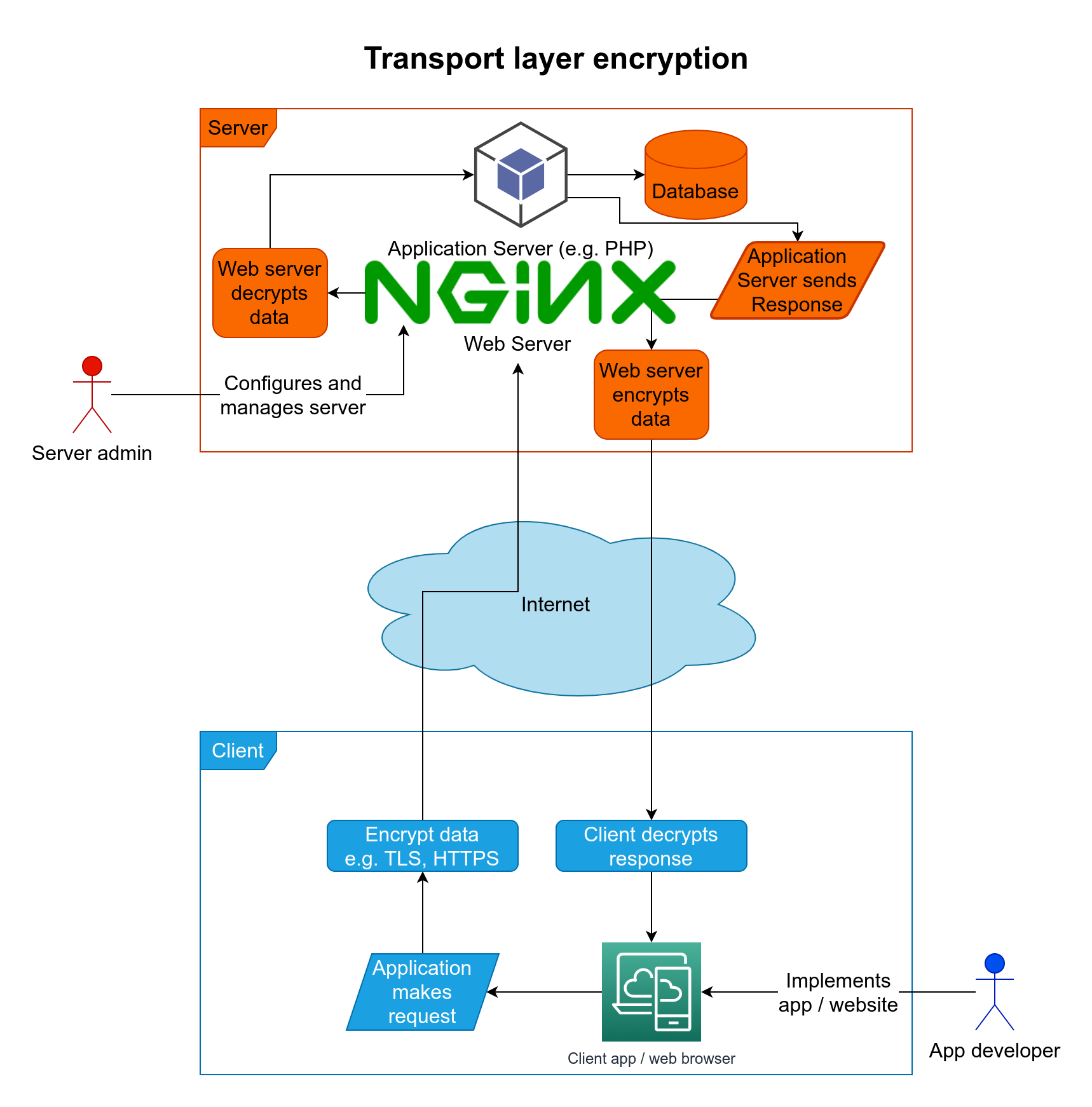 The last form of encryption I'm going to talk about is also perhaps the most misunderstood: end-to-end encryption.

End-to-end encryption is useful when you have 3 parties involved in the equation - usually 2 clients and a server. Suppose Alice and Bob have a messaging app on their phone that sends messages through an intermediary server (perhaps performing store-and-forward functions), but they do not want the server to be able to read their message. The solution here is end-to-end encryption, which prevents the intermediary server from being able to read the message.

Here's a diagram to explain what I mean: 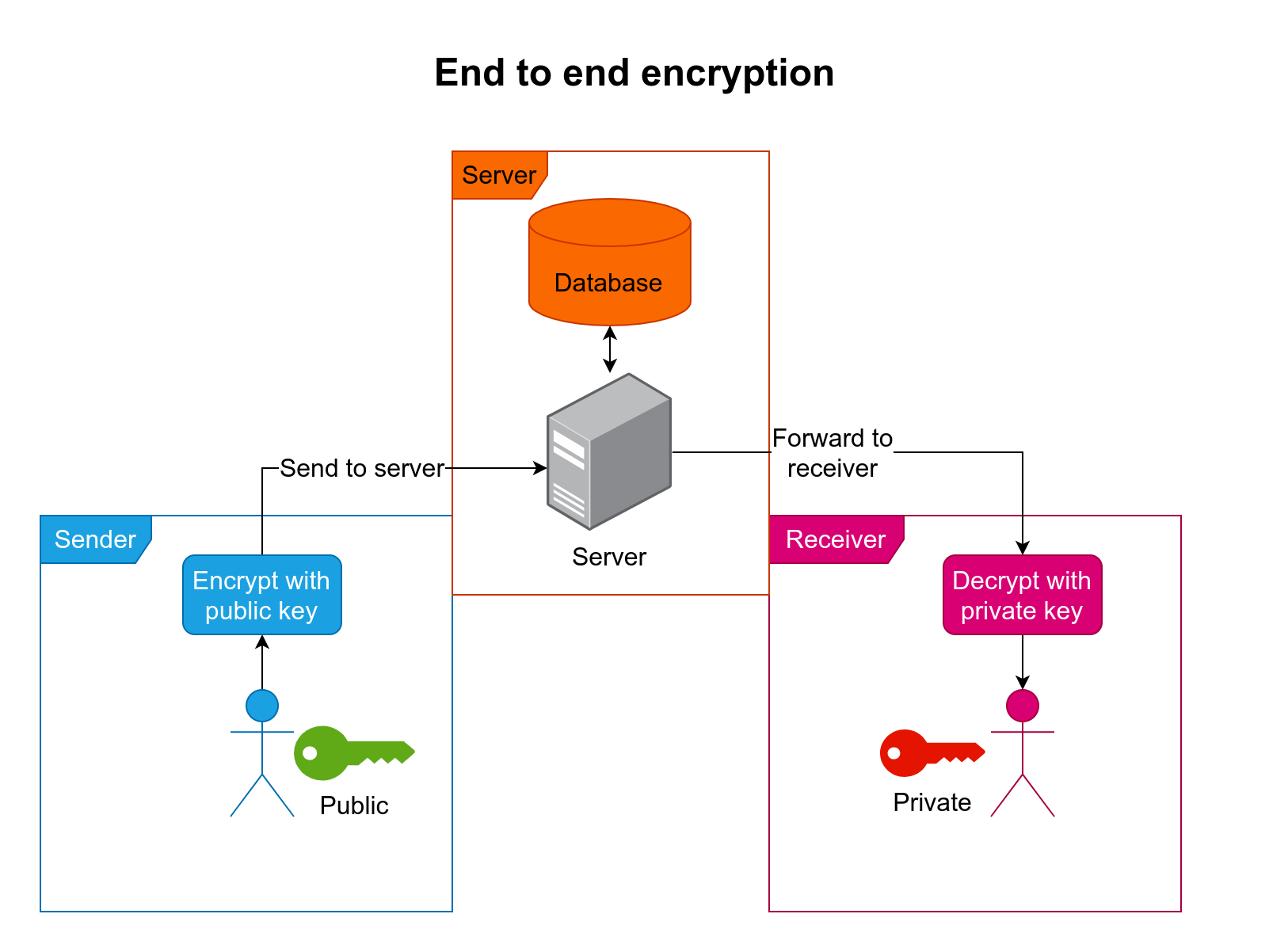 In asymmetric encryption, you have a public key which can only encrypt data, and a private key which can then decrypt the data. An example of this in practice is GPG, which is extensively used e.g. by apt (the package manager on some Linux systems).

In this way, the server is never able to read the content of the message. If the receiver wanted to reply to the sender, the same would happen in reverse. The receiver would need to ask the sender to securely transmit their public key to them, which they could then use to encrypt a message to send back.

In practice, every client involved in an end-to-end encryption system will generate their own keypair that consists of a public and a private key. They will then advertise their public key to everyone, allowing anyone to encrypt a message that only they can decrypt (an example of this: my GPG key can be found here).

In this post, we've looked at 3 types of encryption, how they work, and when they are useful. To summarise:

Each of these are useful in different situations - and most likely are already solved problems. Do not implement any of these yourself. Use well known, battle tested libraries and programs for your platform that are regularly receiving updates instead.

While I've simplified this a lot in writing this post (we'd be here all week if I didn't!), I hope you've found this helpful (or even if you're still confused). This is a starting point, not an ending point - if this kind of thing interests you I can recommend researching it further and playing around with some practical implementations thereof.

Please do comment below (especially if you've spotted a mistake)! It's very motivating to hear that the things I write here are actually helpful to people.