Hey there! Recently, I bought an Ender 3 v2 3d printer, and now that I've used it enough I can talk about how I've found it. In this post, I'll be covering my thoughts on the 2 parts of 3d printing: the printer itself, and the slicing software that you run models through to turn them into G-code that the 3d printer understands. 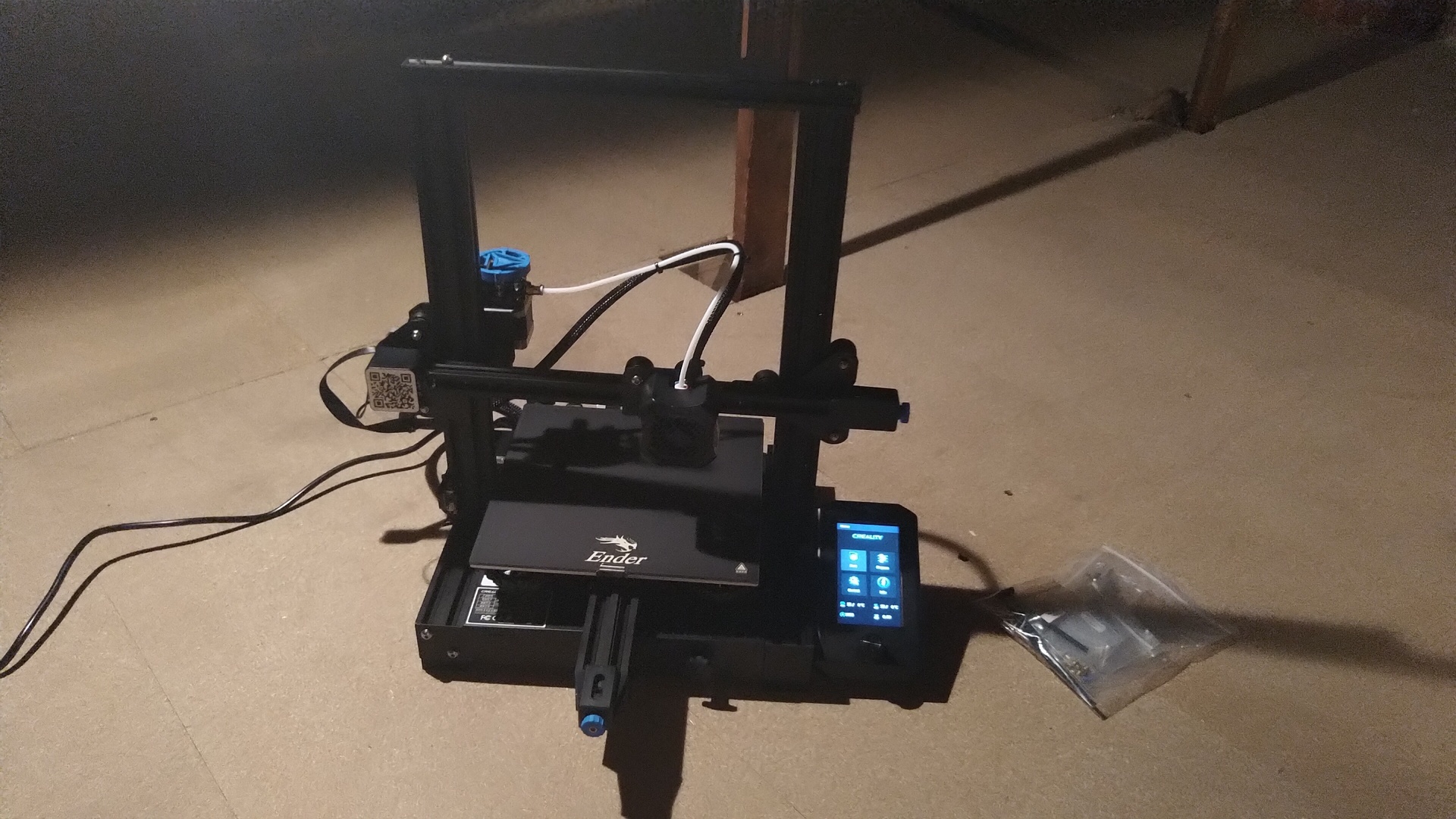 Let's start with the printer itself. Compared to my earlier efforts, it is immediately apparent that the design of the printer is considerably more robust. The frame has 2 pillars that are pretty much impossible to screw together incorrectly (it will be obvious at later steps if you do it incorrectly). The drive belt does not come pre-installed though, which I found to be the most frustrating part of the build.

The instruction booklet was noticeably more sparse and unclear than the Axis 3d instructions though - at some points I found myself having to look up some assembly instructions in order to understand them.

Once assembled, the printer was fairly easy to use. It has a colour display that as I understand it has a significantly higher resolution than previous models by Creality, which allows room for things like icons which greatly enhance the usability of the printer. I suspect that this upgrade may be due to the presence of a 32 bit microprocessor (likely an ARM) rather than an 8 bit one found in previous models, which is bound to come with more RAM etc as standard.

While the printer does come with a small amount of filament, I recommend buying a reel or 2 to use with it. Because the filament that comes with it is not on a reel, it easily tangles into nasty knots. I'm going to empty a reel of other filament first before winding the white filament that came with the printer back onto the empty reel.

Loading the filament takes practice. The advice in the booklet to cut a 45° angle on the end of the filament is really important, as otherwise it's impossible to load the filament past the NEMA motor filament loading mechanism. You have to get the end of the filament at just the right angle too to catch the PTFE tubing that leads to the hot end nozzle. This does get easier though with time - personally I think I need to make or purchase an extra clip-on light, as because my printer is in my loft it can be difficult to see what I'm doing when changing the filament.

Before you print, you have to manually level the bed of the printer. This is done by adjusting the wheels under the 4 corners of the build plate until a piece of plain paper on the build plate just gently scratches the tip of the nozzle. If the wheel in 1 corner doesn't appear to go far enough, try coming back to it and doing the other corners first. By adjusting the wheel in the other corners, the corner in question will be adjusted as well. It is for this reason it is also recommended to go around 2-3 times to make sure it's all level before beginning.

Printing itself is fairly simple. You insert the microSD card containing the G-code, preheat the nozzle to the right temperature, use the auto-home feature, and then select the file you want to print using the menu. I found that it's absolutely essential that you make sure that the build plate itself is as far back is possible - just touching the end-stop - as otherwise you get nasty loud belt grinding noises when it runs through the preamble at the beginning the G-code that causes the hot end to move all the way to the front of the build plate and back again.

Once a print is complete, I've found the supplied scraping tool to be sufficient to extract prints from the print bed. It's much easier to wait between 5 and 10 minutes for the heated bed to cool down before attempting to scrape it off - many prints can just be lifted off the bed with no scraping required (tested with some PLA filament).

Speaking of the build plate, it has a glass surface on top. My research suggested that this leads to a much more even surface on the bottom of prints, and I've certainly found this to be true. While you do have to be careful not to scratch it, the glass build plate the Ender 3 v2 comes with as standard is a nice addition to the printer.

To summarise, the Ender 3 v2 is a really nice solid printer. It's well built and relatively easy to setup and use, though filament organisation and anti-tangling will be the first project you work on when you start printing. 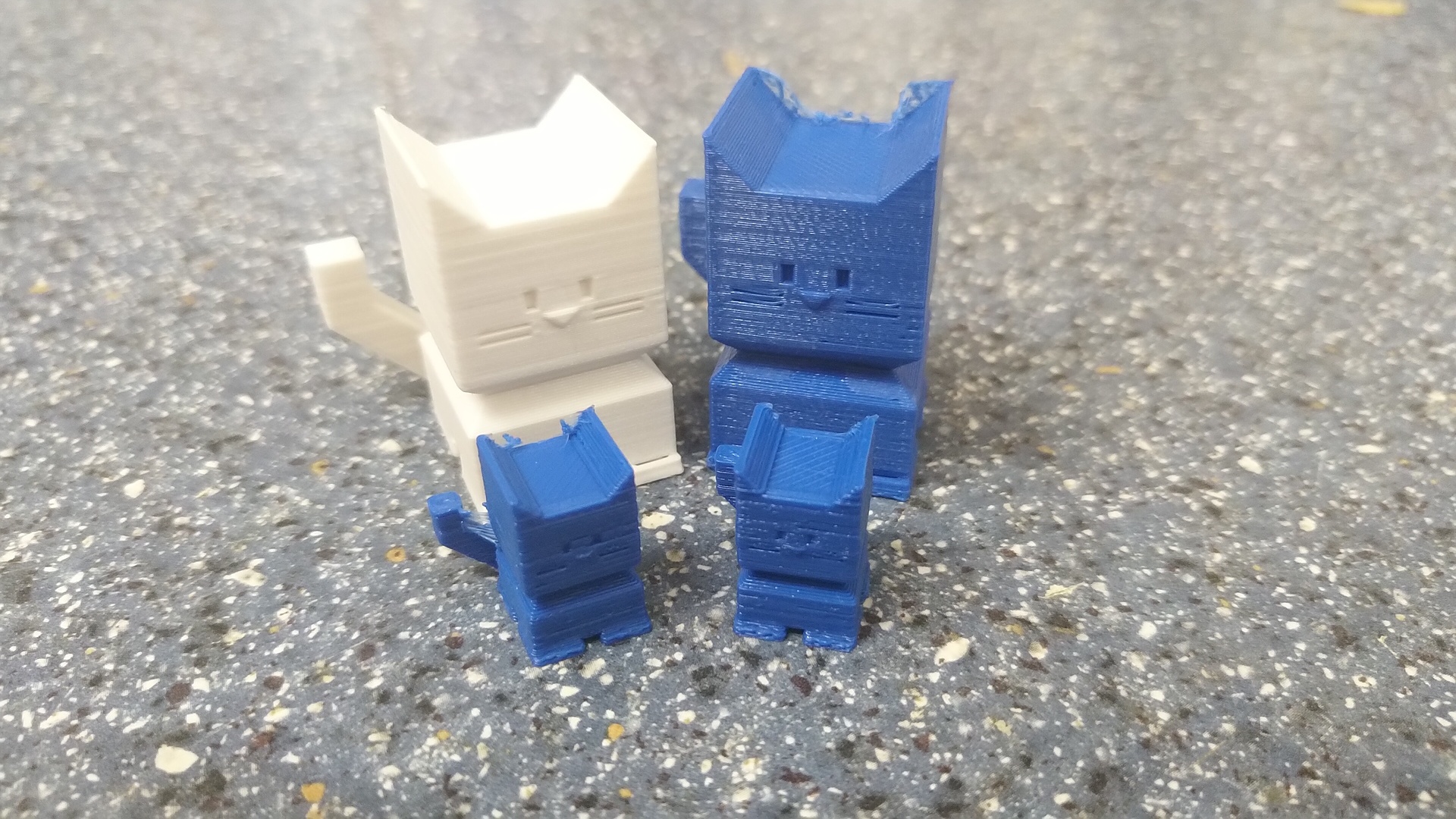 (Above: 4 calibration cats! 3 in blue and 1 in white - the 3 in buile have some stringing issues. I'll definitely be printing more of these :D)

In order to print things, you need to use a slicer, which takes a 3D model (e.g. in a .obj or .stl file). My choice here is Ultimaker Cura. While it's in the default Ubuntu repositories, I found the AppImage on GitHub to be more up-to-date, so I packaged it into my apt repository.

Since Cura doesn't appear to have explicit support for the Ender 3 v2 just yet, I've been using the Ender 3 Pro profile instead, which seems to work just fine.

Cura has a large number of feature which are reasonably well organised for preparing prints. You can import the aforementioned .obj or .stl files and apply various transformations to imported models, such as translate, scale, and rotate. Cura also helpfully auto-snaps the bottom of a model to the virtual build plate for you, so you don't have to worry about getting the alignment right.

Saving and loading project files is annoying. It asks you to specify the place you want to save a project to every time you hit the save button and doesn't remember the location of the project file you saved to last (e.g. like a text editor, GIMP, LibreOffice, etc), which is really frustrating. I guess it's a better than crashing on save like the version of Cura in the default Ubuntu repositories though, so I'll count that as a win?

It would also be helpful if there was a system for remembering or bookmarking the commonly adjusted settings. I've found that I usually need to adjust the same small set of setting over and over again, and it's a pain having to find them in the "expert" settings list or using the search bar.

The preview mode is also useful, as it shows you precisely what your printer will actually end up printing. Great for checking that text is large / thick enough, that parts are large though or avoid losing detail, and for double checking that supports will print the way you expect (I recommend trying the tree mode for supports if you have to use them).

Given that I've used Blender before (exhibit a), it would be very nice to have the ability customise keyboard shortcuts or even better have a Blender keyboard shortcut scheme I could enable. Hitting R, then X, then 90 is just 1 example of a whole range of keyboard shortcuts I keep trying to use in Cura, but Cura doesn't support them.

On the whole, Cura works well as a slicer. It provides many tweakable settings for adjusting things based on the filament you're using (I need to look into making a profile for the filament I use at the moment, as I'm sure the next roll of filament will require different settings). The 3d preview window is intuitive and easy to use. While the program does have some rough edges as mentioned above, these are minor issues that could easily be corrected.

Wait till you use OctoPi/OctoPrint, life becomes easier and you can watch it if you hook up a camera/Picam and turn lights on and off and print directly to it from Cura and batch upload prints too.

In Cura you should be able to save all sorts of setting and preferences.

Under Preferences - Configure Cura... and Profiles. Also your different materials, if you find they need different temps for printing or other tweaks. You can also customise the settings that are visible. There plugin/market place of blender integration, octoprint connection, setting guide
adypbopwbon0acvlbon2bovjbp15

Yeah, Octoprint looks cool! It's on my todo list haha

Yeah, will take a look.

Neat - will take a look! The plugin that displays additional help text is awesome -- I found that one while exploring, but forgot to mention it here.