In my cluster series of blog posts, I've been talking about how I've been building my cluster from scratch. Now that I've got it into some sorta stable state (though I'm still working on it), one of the things I discovered might be helpful for other users of my cluster is a status page.

(Above: The logo for consulstatus. Consulstatus is written by me and not endorsed by Hashicorp or the Consul project.)

To this end, I ended up implementing a quick solution to this problem in PHP. Here's a screenshot of what it looks like: 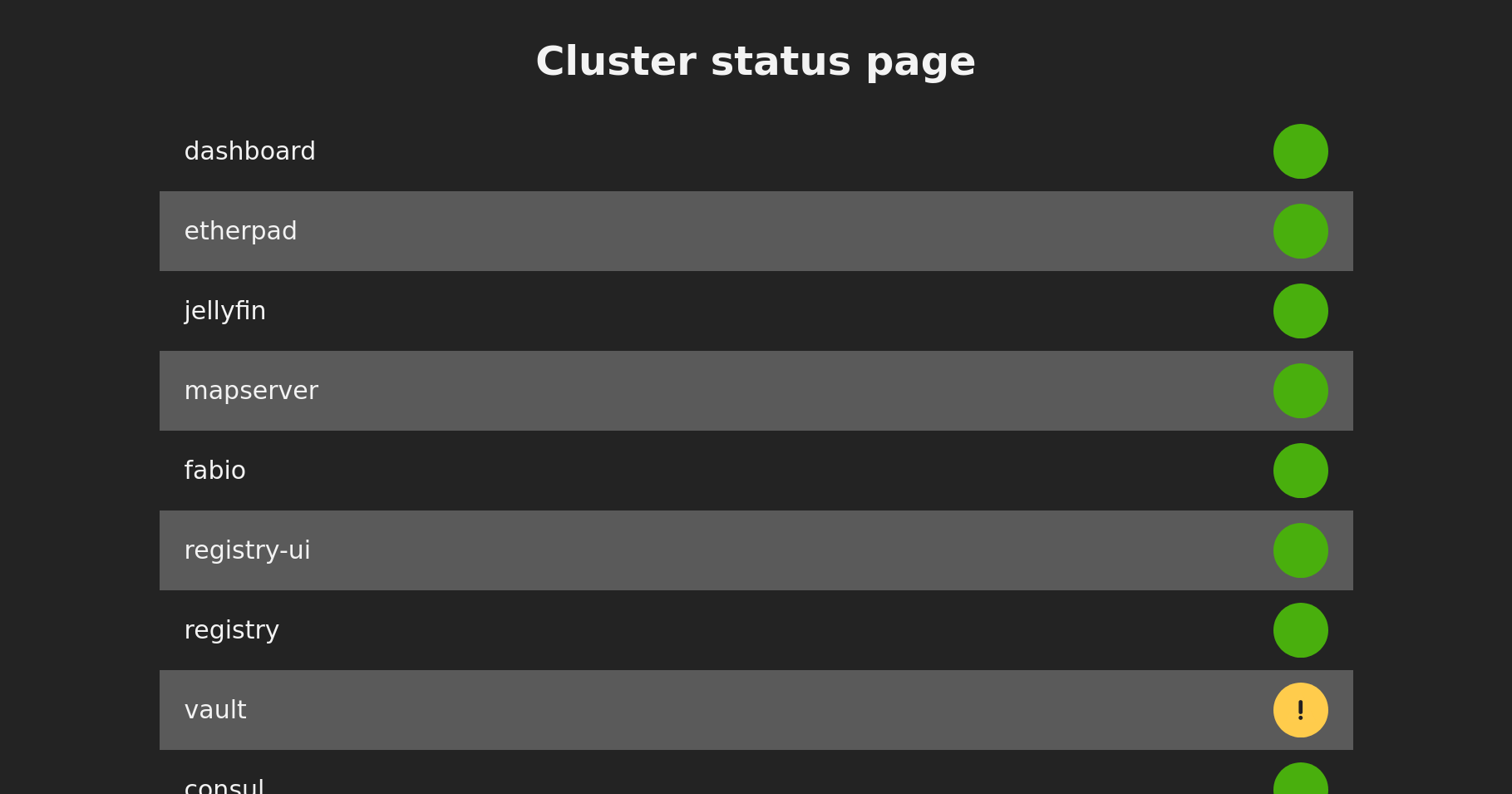 The colour scheme changes depending on your browser's prefers-colour-scheme. The circles to the right of each service are either green (indicating no issues), yellow (some problems are occurring), or red (it's down and everything's terrible))

As the name suggests, it's backed by Hashicorp Consul (which I blogged about in cluster, part 6: superglue service discovery). I recommend reading my blog post about it, but in short Consul allows you to register services that it should keep track of, and checks that define whether said services are healthy or not.

It supports a TOML config file that allows you to specify where Consul is, along with the names of the services you'd like to display:

The status page is designed to be as simple to understand to understand as possible, so that anyone (even those who aren't technically skilled) can get an idea as to what is working and what isn't at any given time.

So far, it's been moderately successful. The status page itself is stable and behaves expectedly (which is always a plus), and it does reflect the status of the services in question.

I did initially toy with the idea of exposing more information about the specific checks in Consul that have failed, but then I thought that I'd be then doing what the Consul web interface already does, which seems a bit pointless.

Instead, I decided to keep it rather minimalist instead, such that it could be exposed publicly (in theory, though my instance is only accessible on my local LAN) in a way that the main Consul web interface really can't.

Moving forwards, I'm quite happy with consulstatus as-is, so if I make any changes they aren't likely to be too drastic. I'd like to look at adding a description to each service so that it's more obvious what it is, or maybe have display names that are shown instead of the Consul service names.

I'd also maybe like to display an icon to the left of each service as well to further help with visual identification and understanding, and perhaps allow grouping services too.

Out of scope though is logging service status history. That can be done elsewhere if desired (and I don't particularly have a need for that) - and PHP isn't particularly suited to that anyway.

- Show descriptive subtext beneath each service!

Code is of course available on GitHub. Wow, I didn't even include a link here. Here's a link to it: <http://github.com/sbrl/consulstatus>