Now that I've finished my University work for the semester (though do have a few loose ends left to tie up), I've got some time on my hands to do a bunch of experimenting that I haven't had the time for earlier in the year.

In this case, it's been tracking down an HTTP router that I used a few years ago. I've experimented with a few now (find-my-way, micro-http-router, and rill) - but all of them few something wrong with them, or feel too opinionated for my taste.

I'm getting slightly ahead of myself though. What's this router you speak of, and why is it so important? Well, it call comes down to application design. When using PHP, you can, to some extent, split your application up by having multiple files (though I would recommend filtering everything through a master index.php). In Node.JS, which I've been playing around with again recently, that's not really possible. 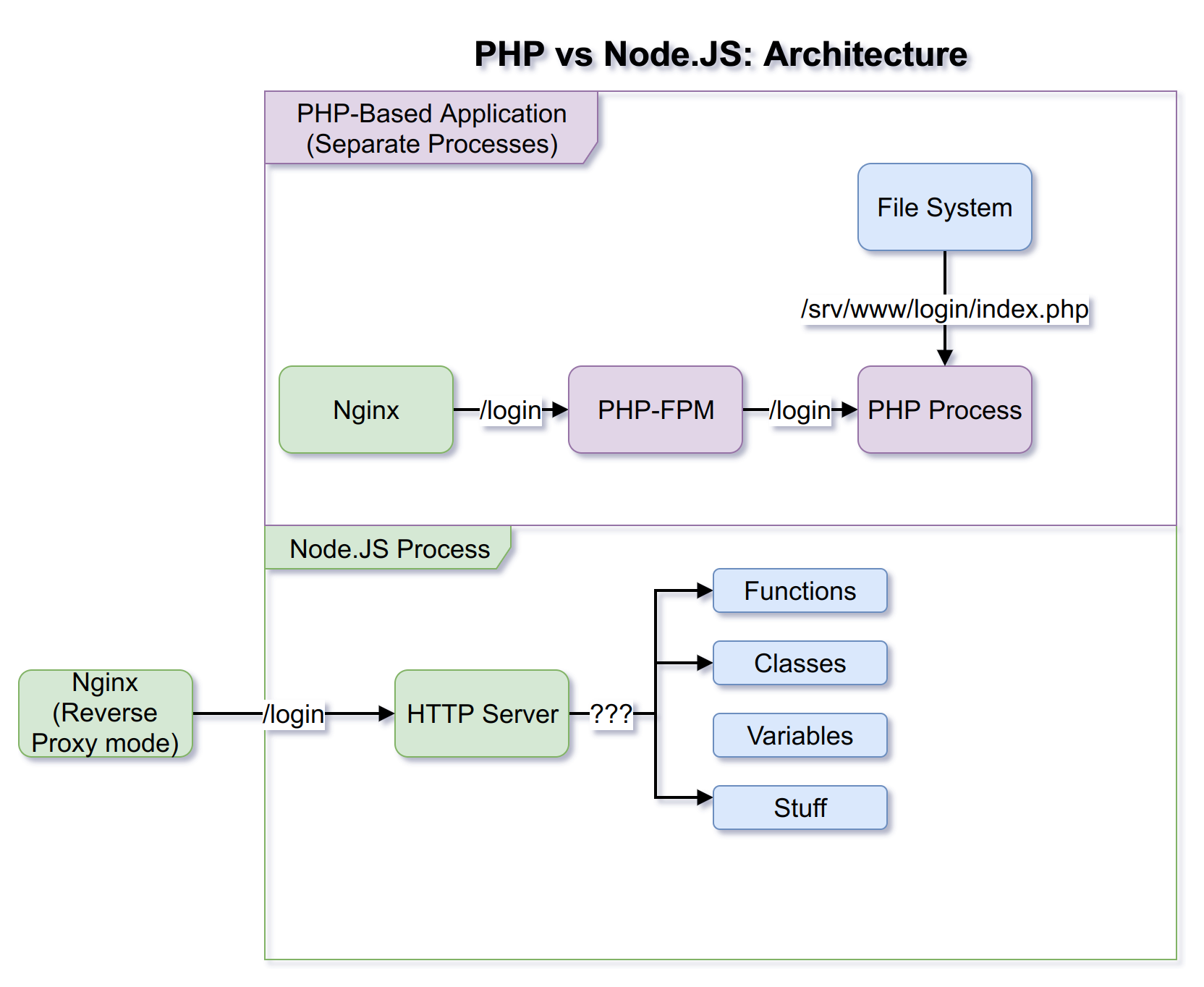 Unlike PHP, which gets requests handed to it from a web server like Nginx via CGI (Common Gateway Interface), Node.JS is the server. You can set up your very own HTTP server listening on port 9898 like this:

This poses a problem. How do we know what the client requested? Well, there's the request object for that - and I'm sure you can guess what the response object is for - but the other question that remains is how to we figure out which bit of code to call to send the client the correct response?

That's where a request router comes in handy. They come in all shapes and sizes - ranging from a bare-bones router to a full-scale framework - but their basic function is the same: to route a client's request to the right place. For example, a router might work a little bit like this:

Pretty simple, right? This way, every route can lead to a different function, and each of those functions can be in a separate file! Very cool. It all makes for a nice and neat way to structure one's application, preventing any issues relating to any one file getting too big - whilst simultaneously keeping everything orderly and in its own place.

Except when you're picky like me and you can't find a router you like, of course. I've got some pretty specific requirements. For one, I want something flexible and unopinionated enough that I can do my own thing without it getting in the way. For another, I'd like first-class support for middleware.

What's middleware you ask? Well, I've only just discovered it recently, but I can already tell that's its a very powerful method of structuring more complex applications - and devastatingly dangerous if used incorrectly (the spaghetti is real).

Basically, the endpoint of a route might parse some data that a client has sent it, and maybe authenticate the request against a backend. Perhaps a specific environment needs to be set up in order for a request to be fulfilled.

While we could do these things in the end route, it would clutter up the code in the end route, and we'd likely have more boilerplate, parsing, and environment setup code than we have actual application logic! The solution here is middleware. Think of it as an onion, with the final route application logic in the middle, and the parsing, logging, and error handling code as the layers on the outside. 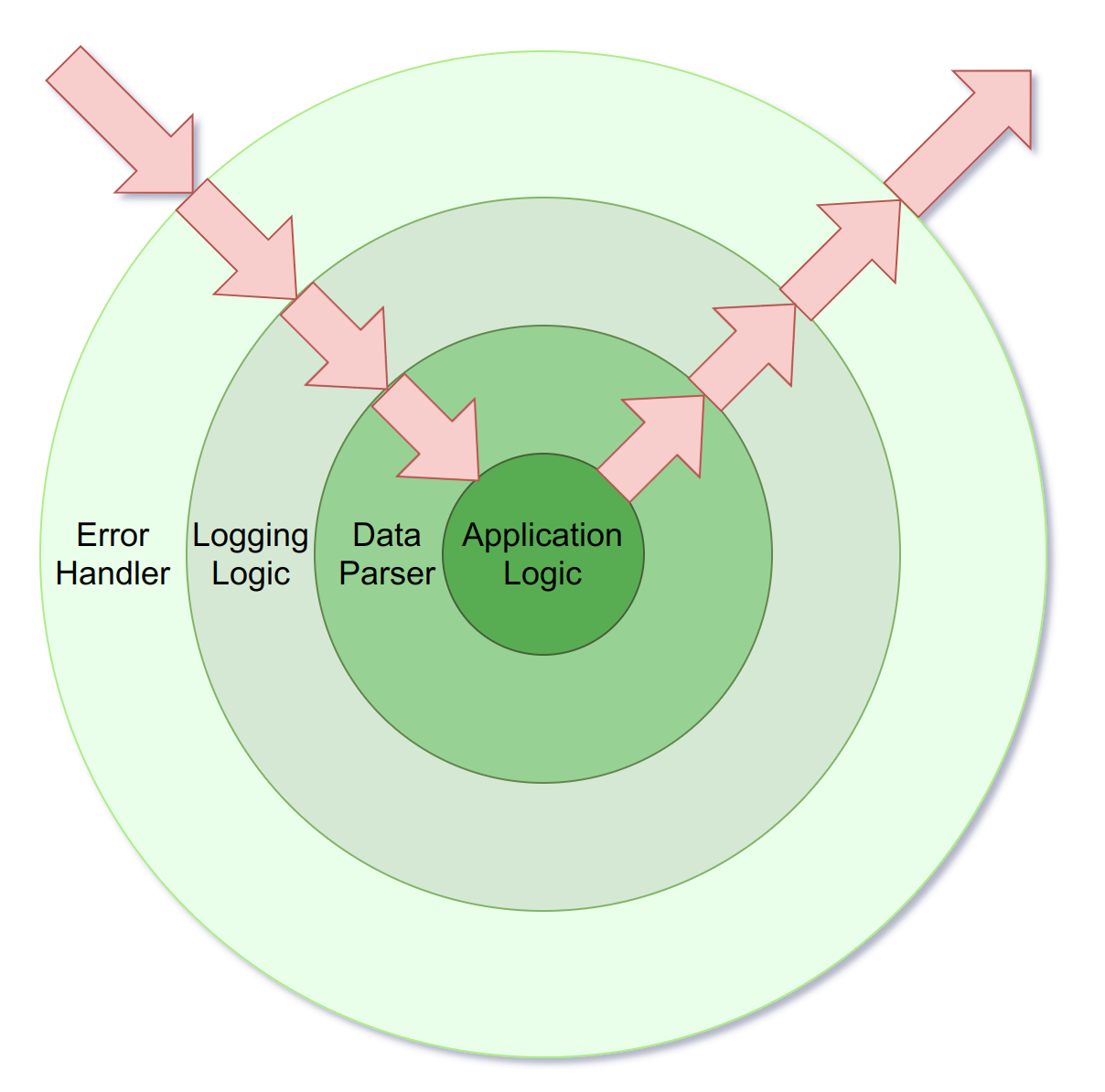 Quite a neat way of looking at it, right? Lets take a look at some example middleware for our fictional router:

See that next() call there? That function call there causes the application to enter the next layer of middleware. We can have as many of these layers as we like - but don't go crazy! It'll cause you problems later whilst debugging.....

What I've shown here is actually very similar to the rill framework - it just has a bunch of extras tagged on that I don't like - along with some annoying limitations when it comes to defining routes.

To that end, I think I'll end up writing my own router, since none of the ones I've found will do the job just right. It kinda fits with the spirit of the project that this is for, too - teaching myself new things that I didn't know before.

If you're curious as to how a Node.JS application is going to fit in with a custom HTTP + WebSockets server written in C♯, then the answer is a user management panel. I'm not totally sure where this is going myself - I'll see where I end up! After all, with my track record, you're bound to find another post or three showing up on here again some time soon.