Since the demonstration for my 3D work is tomorrow and I keep forgetting the details of the OpenGL graphics pipeline, I thought I'd write a blog post about it in the hopes that I'll remember it.

In case you didn't know, OpenGL uses a pipeline system to render graphics. Basically, your vertices and other stuff go in one end, and a video stream gets displayed at the other. This pipeline is made up of number of stages. Each stage has it's own shader, too: 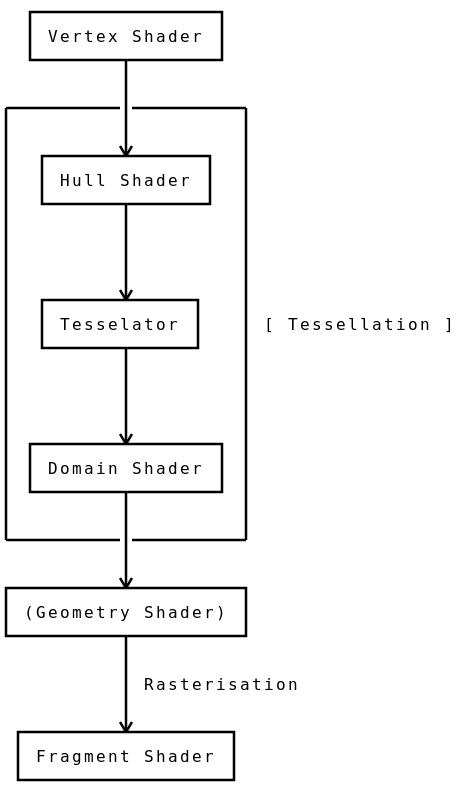 There are rather a lot of stages here, so I've made this table that lists all the different shaders along with what they do:

The tessellator is very interesting. It replaces the geometry shader (which, although you can technically use, you really shouldn't), and allows you to add details to your model on the GPU, thereby reducing the number of vertices you send to graphics card. It also allows you to customize your models before they hit rasterisation and the fragment shader, so you could simplify those models that are further away, for instance.

As an example in our lecture, we were shown the Haven Benchmark. Our lecturer turned the tessellator on and off to show us what it actually does. Since you can't see what I saw, here's an animation I made showing you the difference:

The other pipeline to be aware of is the coordinate pipeline. This pipeline specifies how coordinates are transformed from one space to another. Here's another diagram:

Again, this looks complicated, but it isn't really. A similar process would be followed for 2D graphics as well as 3D ones. If you take it one step at a time, it doesn't seem so bad.

Converting between all these different coordinate spaces is best left up to the vertex shader - it's much easier to shove a bunch of transformation matrices at it and get it to do all the calculations for you. It's so easy, you can do it in just 11 lines of vertex shader code:

If you made it this far, congratulations! That concludes our (rather long) journey through the graphics pipeline and its associated coordinate spaces. We looked at each of the various shaders and what they do, and learnt about each of the different coordinate spaces involved and why they are important.

I hope that someone besides myself found it both useful and educational! If you did, or you have any questions, please post a comment below. If you have spotted a mistake - please correct me in the comments below too! I try to make sure that posts like this one can be used by both myself and others as a reference in the future.