Demystifying microphones: The difference between dynamics and condensers

Welcome back to another demystification post! This time, it's about microphones. I had a question recently about microphones and phantom power, and after doing some rather extensive research on the subject (unintentionally of course :P), I thought it a waste not to summarise it here.

Basically, phantom power is a +48V direct current that's transmitted through a microphone cable (not the kind you plug into your laptop I don't think - the big chunky ones). It's required by condenser microphones (though some use a battery instead), which have a pair of films (called diaphragms) which vibrate. When a current is passed through from one plate to the other, the physical sound gets converted into an electrical signal we can use.

Condenser microphones are much more sensitive than their dynamic microphone counterparts. They are able to better represent a wider range of frequencies - but as a result of this heightened sensitivity, you normally need a pop filter if you're recording vocals. In addition, they don't tend to perform too well in loud environments, such as concerts. Finally, they tend to be more expensive than dynamic microphones, too.

Dynamic microphones, on the other hand, don't require phantom power. They are basically a loudspeaker in reverse and generate the current themselves - they have a single diaphragm that's attached to a metal core - which in turn has a coil of wire around it. When the diaphragm vibrates, so does the metal core - and as you can probably guess, a current is induced in the coil, as metal cores tend to do when inside coils of conveniently placed wires.

While they are better in loud environments (like concerts and drum kits), dynamic microphones aren't so good at representing a wide ranges of frequencies - and as such they are usually tailored to be pick up a specific frequency range better than others. Furthermore, they aren't as sensitive in general as your average condenser microphone, so they don't get on particularly well with very quiet sounds either.

Which you use generally depends on what you want to do. If you've got an overly enthusiastic drummer in a rock concert, you probably want a dynamic microphone. On the other hand, if you're trying to record the song of a cricket on a still summer's evening, you probably want to keep a condenser microphone handy.

I'm not an audio expert, so I might have made a few mistakes here and there! If you spot one, please do let me know in the comments below :-)

Recently I received a message in morse code from a family member using this site. It said that the sender had hidden the message, so I was presented with 2 options: I could sit and decode the message by listening to it over and over again, or write a program to do it for me.

Naturally, as a computer science student and enthusiast, I chose the second option. My first problem: Capture a recording of the target morse code. This was easy - the audio-recorder package in the ubuntu repositories solved that one easily, as it has an option to record the audio output of my laptop.

Second problem: Figure out how to read the recording in and extract the samples in C♯. This one wasn't so easy. Amidst issues with flatpak and Monodevelop (flatpak is terrible!), I eventually found the NAudio (Codeplex, GitHub, NuGet) package to do the job. After some digging, I discovered that NAudio is actually really powerful! It's got some pretty advanced functions for handling audio that I'll have to explore at a later date.

Anyway, with a plan of action I set to work. - decided to work in reverse, so the first thing I needed was a chart that converted morse code into the latin alphabet. Wikipedia to the rescue:

With a handy-dandy conversion chart, it was relatively simple to create a class to handle the conversion from dots and dashes to the latin alphabet automatically:

That was easy! The next challenge to tackle was considerably more challenging though: Read in the audio file and analyse the samples. I came up with that I think is a rather ingenious design. It's best explained with a diagram: 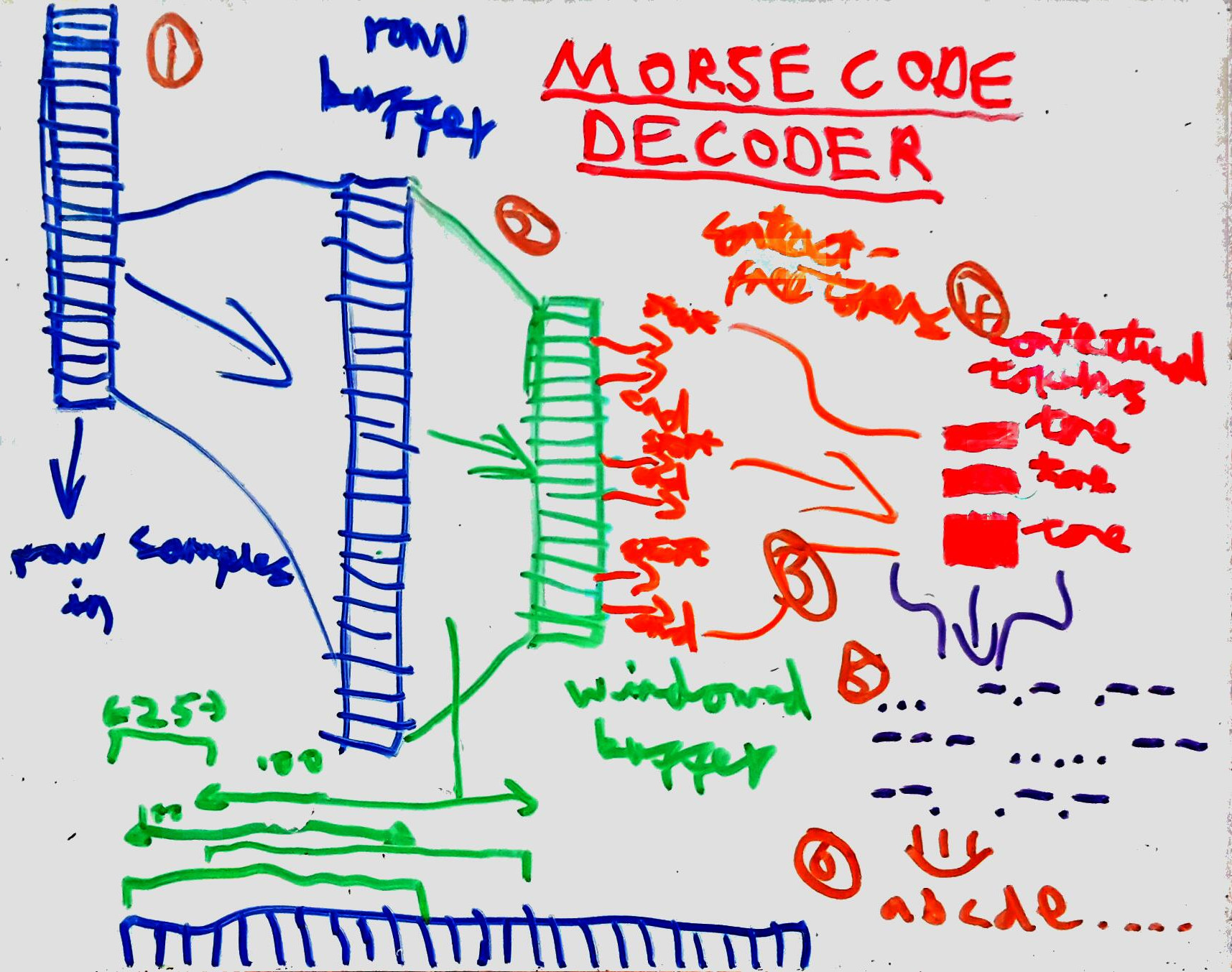 It's a pretty complicated problem when you first think about it, but breaking it down into steps as I did in the above diagram really helps in figuring out how you're going to tackle it. I, however, ended up drawing the diagram after Id finished writing the program.... I appear to find it easy to break things down in my head - it's only when it gets too big to remember all at once or if I'm working with someone else that I draw diagrams :P

Having drawn up an algorithm and 6 steps I needed to follow to create the program, I spent a happy afternoon writing some C♯. While the remainder of the algorithm is not too long (only ~202 lines), it's a bit too long to explain bit by bit here. I have uploaded the full program to a repository on my personal git server, which you can find here: sbrl/AudioMorseDecoder.

If you're confused about any part of it, ask away in the comments below! Binaries available on request.

I'll leave you with a pair of challenging messages of my own to decode. Try not to use my decoder - write your own!

I little while ago I wrote the first version of Soundbox. I forgot to post about it earlier, so I am posting about it now.

Soundbox is a tiny Javascript library I wrote after adding sound to another of my projects via Audio(). I found that you could only play a given sound once, unless you set the currentTime property to 0. I knew that I would forget this later so I wrote a library to do this for me.

I have uploaded the source to a github repository here: sbrl/soundbox. You can also find usage information there in the readme.

Here are the direct links to the latest master versions: