WorldEditAdditions: The story of the //convolve command

Sometimes, one finds a fascinating new use for an algorithm in a completely unrelated field to its original application. Such is the case with the algorithm behind the //convolve command in WorldEditAdditions which I recently blogged about. At the time, I had tried out the //smooth command provided by we_env, but The //smooth command smooths out rough edges in the terrain inside the defined WorldEdit region, but I was less than satisfied with it's flexibility, configurability, and performance.

To this end, I set about devising a solution. My breakthrough in solving the problem occurred when I realised that the problem of terrain smoothing is much easier when you consider it as a 2D heightmap, which is itself suspiciously like a greyscale image. Image editors such as GIMP already have support for smoothing with their various blur filters, the most interesting of which for my use case was the gaussian blur filter. By applying a gaussian blur to the terrain heightmap, it would have the effect of smoothing the terrain - and thus //convolve was born.

The gaussian blur effect is applied by performing an operation called a convolution over the input 2D array. This function is not specific to image editor (it can be found in AI too), and it calculates the new value for each pixel by taking a weighted sum of it's existing value and all of it's neighbours. It's perhaps best explained with a diagram:

All the weights in the kernel (sometimes called a filter) are floating-point numbers and should add up to 1. Since we look at each pixels neighbours, we can't operate on the pixels around the edge of the image. Different implementations have different approaches to solving this problem:

For my implementation of the //convolve command, the heightmap in my case is essentially infinite in all directions (although I obviously request a small subset thereof), so I chose option 2 here. I calculate the boundary given the size of the kernel and request an area with an extra border around it so I can operate on all the pixels inside the defined region.

Given an input image, for each pixel we take a multiply the kernel by each pixel and it's neighbours, and for each resulting matrix we sum all the values therein to get the new pixel value.

The specific weightings are of course configurable, and are represented by a rectangular (often square) 2D array. By manipulating these weightings, one can perform different kinds of operations. All of the following operations can be performed using this method:

After implementing the core convolution engine, writing functions to generate kernels of defined size for the above kernels was a relatively simple matter. If you know of another kernel that you think would be useful to have in WorldEditAdditions, I'm definitely open to implementing it.

For the curious, the core convolutional filter can be found in convolve.lua. It takes 4 arguments:

Reflecting on the implementation, I'm pretty happy with it within the restrictions of the environment within which it runs. As you might have suspected based on my explanation above, convolutionally-based operations are highly parallelisable (there's a reason they are used in AI), and so there's a ton of scope for at using multiple threads, SIMD, and more - but unfortunately the Lua (5.1! It's so frustrating since 5.4 is out now) environment in Minetest doesn't allow for threading or other optimisations to be made.

The other thing I might do something about soon is the syntax of the command. Currently it looks like this:

Given the way I've used this command in-the-field, I've found myself specifying the kernel width and the sigma value more often than I have found myself changing the kernel. With this observation in hand, it would be nice to figure out a better syntax here that reduces the amount of typing for everyday use-cases.

In a future post about WorldEditAdditions, I want to talk about a number of topics, such as the snowballs algorithm in the //erode. I also potentially may post about the new //noise2d command I've working on, but that might take a while (I'm still working on implementing a decent noise function for that, since at the time of typing the Perlin noise implementation I've ported is less than perfect).

Personally, I see enormous creative potential in games such as Minetest. For those who aren't in the know, Minetest is a voxel sandbox game rather like the popular Minecraft. Being open-source though, it has a solid Lua Modding API that allows players with a bit of Lua knowledge to script their own mods with little difficulty (though Lua doesn't come with batteries included, but that's a topic for another day). Given the ease of making mods, Minetest puts much more emphasis on installing and using mods - in fact most content is obtained this way.

Personally I find creative building in Minetest a relaxing activity, and one of the mods I have found most useful for this is WorldEdit. Those familiar with Minecraft may already be aware of WorldEdit for Minecraft - Minetest has it's own equivalent too. WorldEdit in both games provides an array of commands one can type into the chat window to perform various functions to manipulate the world - for example fill an area with blocks, create shapes such as spheres and pyramids, or replace 1 type of node with another.

Unfortunately though, WorldEdit for Minetest (henceforth simply WorldEdit) doesn't have quite the same feature set that WorldEdit for Minecraft does - so I decided to do something about it. Initially, I contributed a pull request to node weighting support to the //mix command, but I quickly realised that the scale of the plans I had in mind weren't exactly compatible with WorldEdit's codebase (as of the time of typing WorldEdit for Minetest's codebase consists of a relatively small number of very long files). 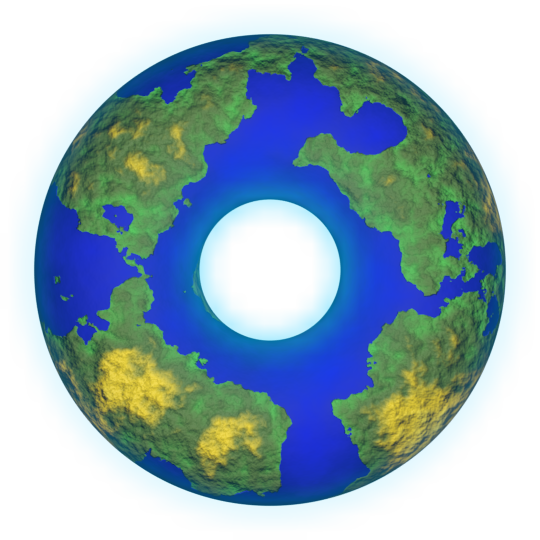 (Above: The WorldEditAdditions logo, kindly created by @VorTechnix with Blender 2.9)

To this end, I decided to create my own project in which I could build out the codebase in my own way, without waiting for lots of pull requests to be merged (which would probably put strain on the maintainers of WorldEdit).

The result of this is a new mod for Minetest which I've called WorldEditAdditions. Currently, it has over 35 additional commands (though by the time you read this that number has almost certainly grown!) and 2 handheld tools that extend the core feature set provided by WorldEdit, adding commands to do things like:

These are just a few of my favourites - I've implemented many more beyond those in this list. VorTechnix has also contributed a raft of improvements, from improvements to //torus to an entire suite of selection commands (//srect, //scol, //scube, and more), which has been an amazing experience to collaborate on an open-source project with someone on another continent (open-source is so cool like that).

A fundamental difference I decided on at the beginning when working of WorldEditAdditions was to split my new codebase into lots of loosely connected files, and have each file have a single purpose. If a files gets over 150 lines, then it's a candidate for being split up - for example every command has a backend (which sometimes itself spans multiple files, as in the case of //convolve and //erode) that actually manipulates the Minetest world and a front-end that handles the chat command parsing (this way we also get an API for free! Still working on documenting that properly though - if anyone knows of something like documentation for Lua please comment below). By doing this, I enable the codebase to scale in a way that the original WorldEdit codebase does not.

I've had a ton of fun so far implementing different commands and subsequently using them (it's so satisfying to see a new command finally working!), and they have already proved very useful in creative building. Evidently others think so too, as we've already had over 4800 downloads on ContentDB:

Given the enormous amount of work I and others have put into WorldEditAdditions and the level of polish it is now achieving (on par with my other big project Pepperminty Wiki, which I've blogged about before), recently I also built a website for it: 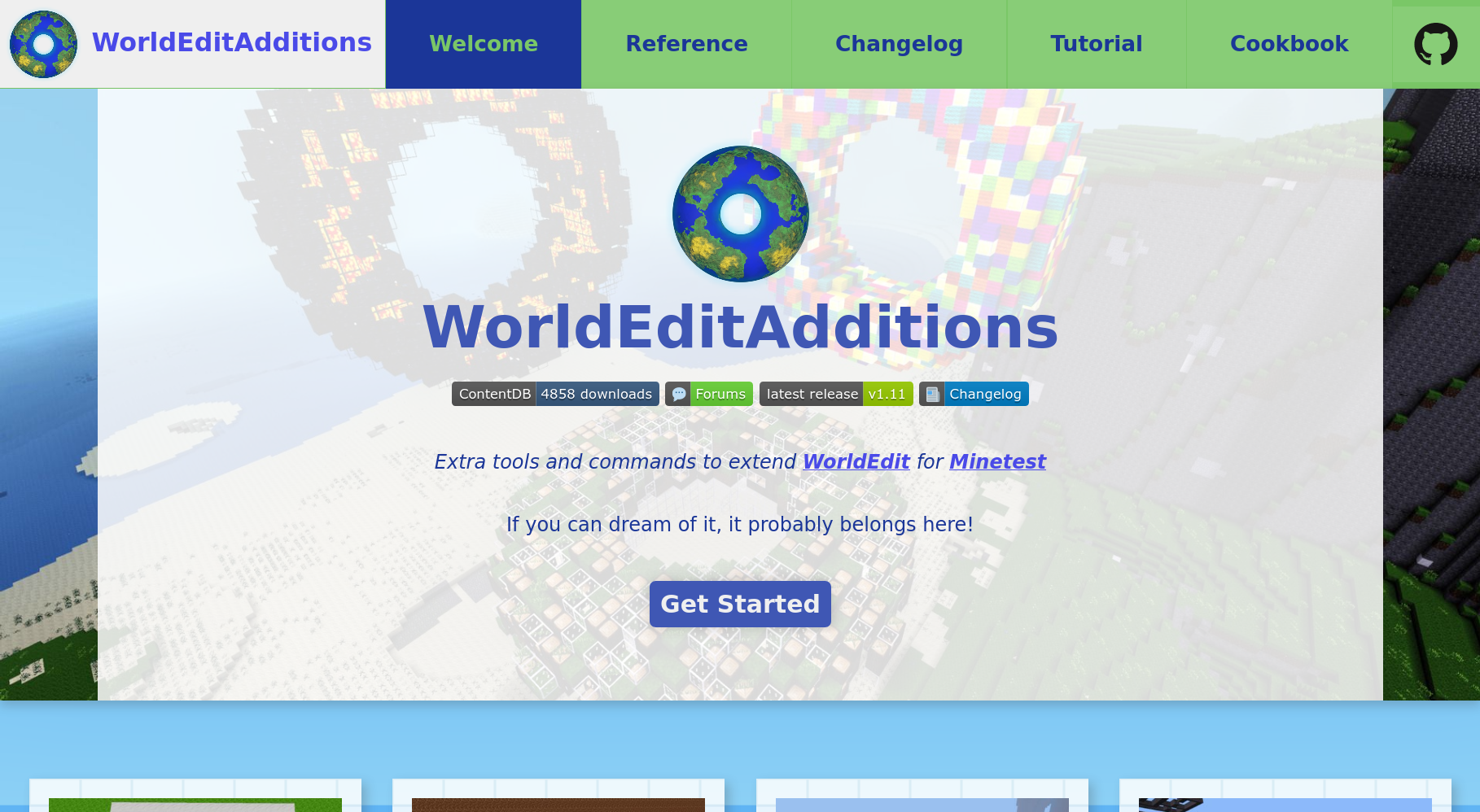 You can visit it here: https://worldeditadditions.mooncarrot.space/

I think I covered all of these bases fairly well, but only time will tell how actual users find it (please comment below! It gives me a huge amount of motivation to continue working on stuff like this).

Several components of the WorldEditAdditions codebase deserve their own blog posts that have not yet got one - especially //erode and //convolve, so do look out for those at some point in the future.

Moving forwards with WorldEditAdditions, I want to bring it up to feature parity with Worldedit for Minecraft. I also have a number of cool and unique commands in mind I'm working on such as //noise (apply an arbitrary 2d noise function to the height of the terrain), //mathapply (execute another command, but only apply changes to the nodes whose coordinates result in a number greater than 0.5 when pushed through a given arbitrary mathematical expression - I've already started implementing a mathematical expression parser in Lua with a recursive-descent parser, but have run into difficulties with operator precedence), and exporting Minetest regions to obj files that can then be imported into Blender (a collaboration with @VorTechnix).

If you find it useful, please consider starring it on GitHub and leaving a review on ContentDB! If you run into difficulties, please open an issue and I'll help you out.