A while back (I still have all sorts of projects I've forgotten to blog about - with many more to come), I forked an excellent project called simple-dash, which is a web dashboard. You can configure it to display 1 or more links, and it presents them nice and cleanly in the middle of the page.

I don't make forks lightly, but in this case I liked the project a lot - but I wanted to add enough features that I felt that I might be taking it in a different direction than the original project. The original project also hasn't been touched in 2+ years, and the author hasn't had any contributions on GitHub in that time either - so think it's fair to say that it's unlikely that any pull request I open wouldn't be looked at either (if the original author is reading this, I'm happy to open one!).

Anyway, before I continue too far, here's a screenshot of my improvements in action:

I use simple-dash in multiple places to provide a dashboard of links to the various services that I run so I both don't lose them and, in some cases, other people in my family can easily access said services.

I added a number of features here. The first is invisible, but I completely re-implemented the layout to use the CSS Grid (see also: a, b). If you've played with CSS before but aren't yet aware of the CSS grid yet - I can thoroughly recommend you take a moment to investigate - it will blow you away and solve all your layout problems all at the same time! In short, it's like a 2d version of the flexbox.

Since the original has full mobile support, I continue that trend in the rewrite with some CSS media queries to change the number of items per row based on the width of your screen.

Anyway, in terms of more visible changes, I also added the ability to set a background image, as well as the default random triangles background. Icons also got the same treatment - gaining the ability to display an image instead of a Font Awesome icon (I haven't actually used Font Awesome before, so this was an interesting experience - even if it was already setup in this project).

Last but certainly not least, I added the ability group pages into folders. Here's a screenshot of what the contents of that folder in the top left looks like when opened: 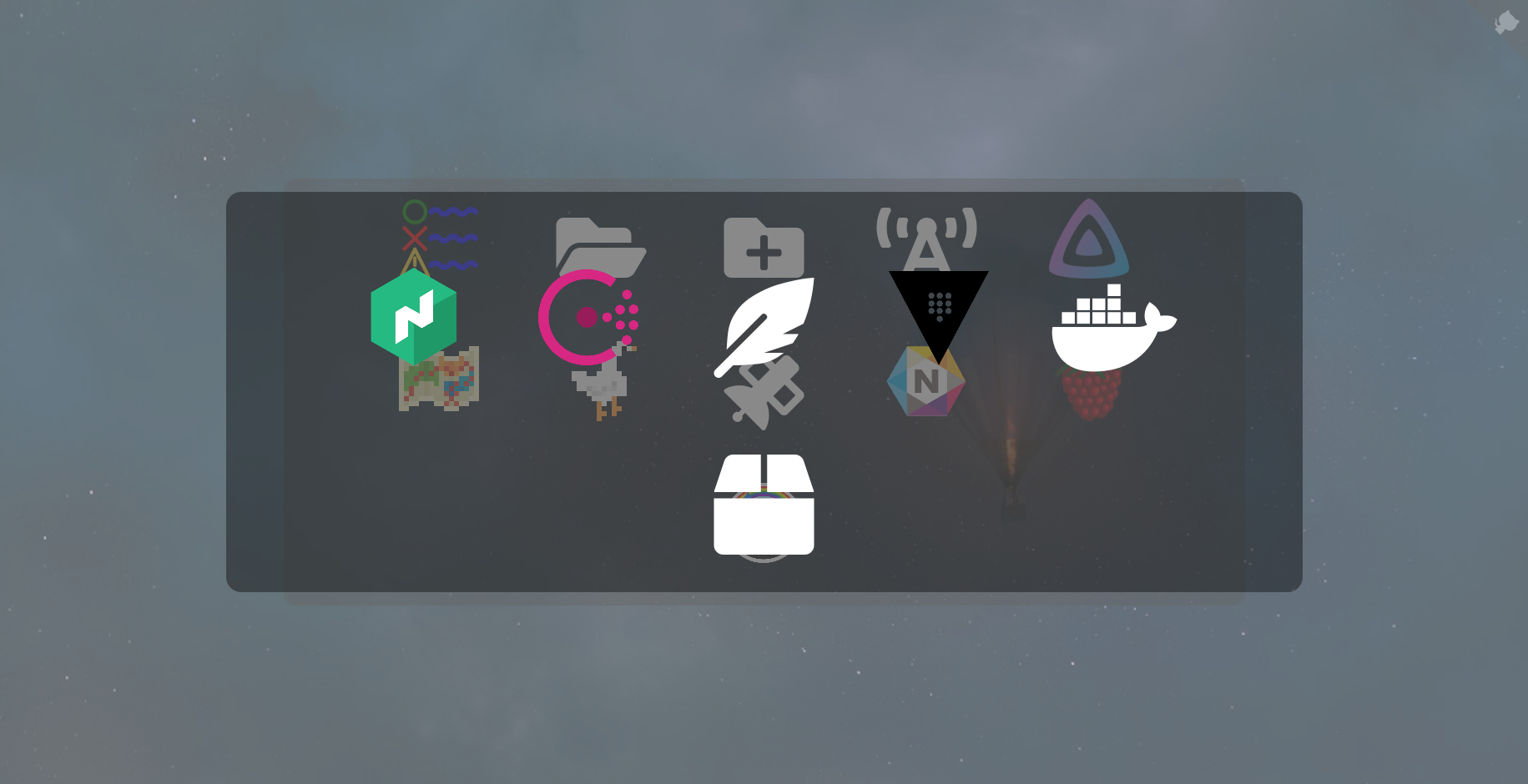 You can't see it here, but it's even animated! Link to a demo at the end of this post.

There were a number of different challenges to overcome to get this working right actually - it was not trivial at all. There are 2 components to it: The CSS to style it, and the Javascript to fiddle the class list on the folder itself to add / remove the active class so that I could distinguish between open and closed folders in the CSS, and also prevent the click event from propagating through to the <a href="https://example.com/">links</a> links when the folder is closed.

Thinking about it, it may be possible use a clever pointer-events: none to avoid the Javascript.

The CSS does the heavy lifting here though. For inactive folders, I use a CSS grid with overflow: none to display the 1st 4 icons in a preview. When the folder becomes active, position: fixed breaks it out of the layout of the rest of the page (sadly leaving a placeholder behind would require an additional html element), and the content reflows to use the same CSS as the main grid of tiles.

Through some CSS grid wizardry (you can do anything with CSS grid, it's amazing) and a container element, I can even fade out the rest of the page while the folder is open.

Clicking on the items in a folder when the folder is open takes you to their destination as usual, while clicking anywhere else closes the folder again.

I've got a demo running over here if you'd like to play around with it:

The background is set to a random image from Unsplash. It loads fine for me, but sometimes it takes a moment.

If this looks like something, you'd like to use for yourself, my fork is open-source! Check it out here:

You can find instructions on how to set it up for yourself in the README. You'll need npm to install dependencies - this should come bundled with Node.js. You can also find a lovingly-commented example configuration file here:

If you have any difficulties setting it up, want to request a feature, or even (gasp!) report a bug, please open an issue. While I do monitor the comments here on this blog, GitHub issues are a much better place to track bugs and feature requests.