Yesterday I found myself in the awkward position in which I needed to push some commits in a git repository to an existing SVN repository. This came about because as soon as my 3D module was finished at University, I copied my code over to a private git repository and started working from there instead. As luck would have it, I ended up running into a few nasty issues and needed to push my extra commits to the original SVN repository.

Since it took me a while to work out how to accomplish this, I thought I'd write a blog post on it. Credit for this method goes to Pete Goodliffe for figuring out how to do it.

The first thing you need to do is to install git svn, if you haven't already. If you're on Windows, then you probably already have it if you've got git (which you'll need too). If you're not sure, simply type git svn into a command line (or terminal), and if you don't get a 'svn' is not a git command message, you've got it installed.

Next, you need to use git svn to clone your SVN repository. Even if you've got a clone sitting somewhere already, you should create a fresh one, just in case. This process may take a long time, depending on how many commits you've made to the SVN repository. Use the following command:

Replace {svnRepositoryUrl} with the URL of your remote SVN repository. Now that you've done that, cd into the created directory.

Next, we need to add the git repository as a new remote. To do this, type something like this:

Replace {gitRepoUrl}with the url of your remote git URL. Now we've set everything up, we can replay the remote git repository's commits overtop the commits in the SVN repository:

Again, this may take a while. Once this command has completed, all you have to do is a quick git svn dcommit to push the new commits up to the SVN repository.

Alternatively you can push the SVN commits to the remote git repository by entering the following commands instead of the rebase command above:

That's about all I wanted to include in this post. If you found this post useful (and even if you didn't!), please leave a comment down below. 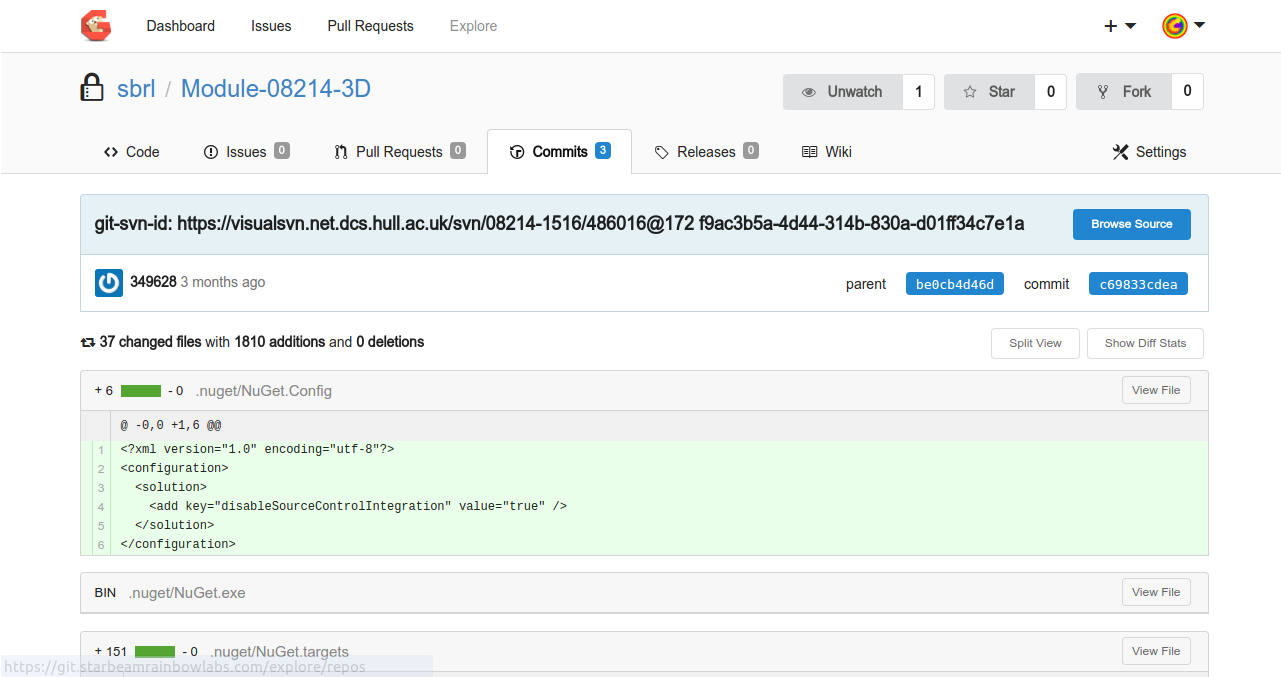 My university uses SVN as their preferred source code control system, and I came into contact with it for the first time the other day. For one of the modules I'm taking this year all the lab work is located in a special SVN repository. The ACW (assessed coursework) also has to be submitted through this SVN repository.

I found that (after some simple mistakes) it's not particularly difficult to pull down a repository - just a little bit fiddly (you have to create the directory to clone a repository into first). The trouble started when I tried to commit my changes. I found it almost impossible to just do a simple commit that contains all of the changes I'd made so far, though I might be missing something.

SVN itself feels rather clunky and outdated in the way it works. It doesn't have an inbuilt fork system, and you can't commit if you are offline (or if the central master repository is offline). Git, by comparison, supports both of these things. In addition, git apparently has better support for branching and merging, though I haven't come into contact with it yet.

My solution for this for now it to use git-svn. To check if you have it installed, simply run the command git svn --help. If it's installed, you will get a help message. If not, you'll get a harmless error message. On Linux you can install it via sudo apt-get install git-svn. On Windows you should have it installed by default.

Hopefully this post is helpful to someone. If I'm missing something here (and I probably am) please leave a comment below!

Update: If you need to pull down remote changes from the server, simply run `git svn rebase.