At a recent plant sale at my University, I bought myself both a parlour palm and an areca palm for my desk. They look lovely, but I always worry that I'm going to forget to water them. 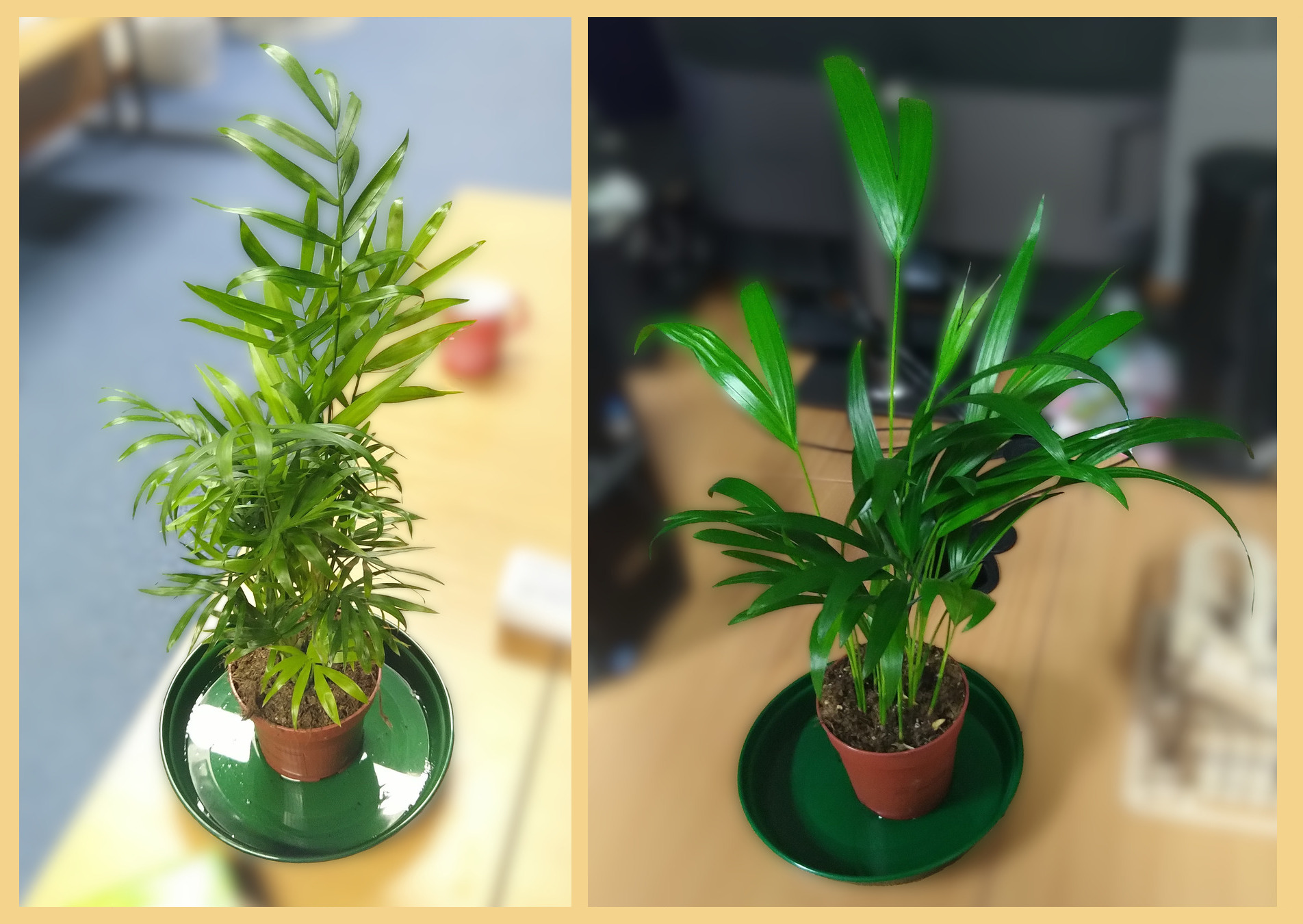 Having some experience with arduino already, I decided to resolve the issue by implementing an arduino-based system to monitor my new plants and log the resulting data in my existing collectd-based (see also CGP which I use, but sadly it's abandonware. Any suggestions for alternatives are greatly appreciated) monitoring system I use for the various servers and systems that I manage.

The eventual aim is to completely automate the watering process too - but before I can do that I need to first get the monitoring up and running so that I can calibrate the sensors, so this is what I'll be focusing on in this post.

To do this, I've used a bunch of parts I have lying around (plug a few new ones), and wired up a NodeMCU v0.9 to some sensors:

(Above: The circuit I've wired up. See the Fritzing file.)

A full list of parts can be found at the end of this post, along with links to where I got them from. The sensors I'm using are:

Both the soil sensors and the liquid level sensors give out an analogue signal (shown in orange), but unfortunately the NodeMCU v0.9 (based on the ESP8266) only has a single analogue pin, so I bought myself a CD4051 from switch electronics (link at the bottom of this post) to act as a multiplexer. Given 3 digital wires to act as a channel selector (shown in purple), it allows you to select between 8 different analogue channels - perfect for my use-case. You can see it in the diagram at the left-hand side of the larger breadboard.

While the Fritzing design for a USB breakout board isn't exactly the same as the ones I have, I plan on using them to transport power, ground, and the 2 analogue outputs from the 2 sensors for the plant on the other side of my desk.

The other component here is a BME280 I have lying around to monitor temperature, humidity, and air pressure. This isn't required, but since I have one lying around anyway I thought it was a good idea to use it.

With the circuit designed and implemented (still got to finalise the USB breakout boards), the next thing to organise is the transport and logging for the data generated. MQTT is easy to use on the Arduino because of PubSubClient, so that's what I decided on using.

Time for another diagram!

(Can't see the above? Try a PNG instead.)

If you've followed my blog here for a while, you might remember that I have a cluster that's powered by a bunch of Raspberry Pis running Hashicorp Nomad and Consul.

On this cluster - amongst a many other things - I have an MQTT server (check out my earlier post on how to set one up) running inside a Docker container as a Nomad task. Connections to my Mosquitto MQTT server are managed by Fabio, which reverse-proxies connections to Mosquitto. Fabio exposes2 ports by which one can connect to the MQTT server:

In doing so, Fabio terminates TLS so that Mosquitto doesn't need to have access to my TLS certificates. For those interested, the proxy.addr in your fabio.properties file is actually a comma-separated list, and to achieve TLS termination for MQTTS you can add something like this to proxy.addr (make sure to use an up-to-date cipher list):

Then if we continue working backwards, the next piece of the puzzle is port forwarding on my router. While Fabio exposes both MQTT and MQTTS, I only port-forward MQTTS and not unencrypted MQTT. My autoplant system will only be communicating over MQTTS, so it doesn't make sense to expose the less secure unencrypted port to the world too.

From here, no matter where in the world my autoplant monitoring system is located it will still be able to send sensor values back to be logged.

Working forwards again from the Mosquitto MQTT server, the Arduino is going to send MQTT messages to the sensors/data topic with messages that look something like this (but minified):

The MQTT plugin for Collectd doesn't support JSON input though, so I'm going to write a broker that translates messages from the JSON format above to the format that Collectd likes. My reasoning for this is twofold:

I haven't fully decided on which language I'm going to write this validating broker in, but I'm thinking it might end up being a shell script. Weird as it sounds, I found a cool MQTT library for Bash called bish-bosh which I want to try out. My second choice here would be Rust, but I unfortunately can't find a (preferably pure-rust) MQTT(S) library, which I'm finding rather strange.

Either way, if possible I'm going to package up the completed implementation of this broker into a Docker container and write a quick Hashicorp Nomad job file to get it running on my cluster so that it benefits from the reundancy of my Nomad cluster. Then, with collectd listening on another topic, it can transparently bridge the 2. I'm not quite sure how will collectd's MQTT plugin actually works though, so this shell script may end up being a child process of my main collectd server using the exec plugin instead.

In this post, I've outlined my solution to a seemingly simple problem of watering plants automatically (because all simple problems need complex solutions :P). With an arduino-based system, I'm going to send messages via MQTTS containing sensor data, which will then be passed to a backend for processing. In future posts in this series, I want to (in no particular order):

Not all of these warrant a separate post, but there are definitely multiple posts to come on this project :D

When editing large documents, it's often helpful to have a hierarchical "navigation view" of sorts. For a text document like the Markdown that I'm typing now for this blog post, it would consist of a list of headings in the document. For a Javascript or C♯ file, it might consist of classes, functions, and methods.

Either way, it's a helpful thing to have - but for some ridiculous reason as far as I know a generic text document outlining tool doesn't exist.

While GitHub's Atom (my code editor of choice) has an atom-ide has an outline view that works great, it only supports a limited number of languages (you have to have a plugin installed for every language), and sometimes it hangs and takes like 30 seconds plus to generate the outline.

To this end, I intend to remedy the situation with a new library I'm writing call Skyliner.

It's based on finite-state automata and regular expressions (also, Wikipedia and regexper), and it streams the input and generates an outline line-by-line. It provides both a command-line interface and a Javascript API (though the command-line interface currently consumes all input before generating any output, but the library is capable of streaming objects as it consumes the input). As of the time of typing, it supports the following languages:

While using regular expressions means that the output won't be perfect (especially in the case of XML/HTML), it does mean that adding support for a new language is as simple as defining a new finite-state automaton in a Javascript object. Adding support for Lua was a 10-15 minute job - including automated tests! Support for more languages is definitely on the way.

The combination of line-by-line parsing, regular expressions, and finite-state automata also means that it's much faster than Atom IDE, because it doesn't have to parse the entire document into an abstract syntax tree before generating the outline.

My goal here is to have good support as many languages as possible, rather than amazing support for just a small handful of languages. This isn't to say that I won't fix issues with existing languages as they come up, but the focus is really on ensuring that whenever I open a text document in Atom.

Once I've added support for a bunch of languages, written some documentation, and published it on npm, I'm going to try my hand it implementing my first plugin for GitHub's Atom. Apparently plugins for Atom aren't too difficult to port to Visual Studio Code, so maybe I'll take a look at doing that too (but I don't use Visual Studio Code much, so not a priority).

The code is open-source already (link below) and completely usable, but since it's an ongoing process you can expect another post on here in the future about my progress.

If you'd be interested in some more detail about how it works, I'll be writing some documentation soon, which will appear in the above Git repository.