Support for the prefers-color-scheme landed in Firefox 67 beta recently. While it's a little bit awkward to use at the moment, it enables support for a crucial new feature on the web: Changing the colour scheme of a webpage based on the user's preference.

Traditionally, some websites have supported enabling a site-specific option in their settings, but this requires that the user enable an option manually when they visit the website - and has to be reset on every device and in every private browsing session.

The solution to this is the new prefers-color-scheme CSS level 5 media query. It lets you do something like this:

Hey presto - the theme will now auto-change based on the user's preference!

Here's a live demo of that in action:

See the Pen prefers-color-scheme demo by Starbeamrainbowlabs (@sbrl) on CodePen.

(Can't see the above? Try a direct link.)

Currently, Firefox 67+ and Safari (wow, who knew?) support the new media query - as of the time of typing. For Firefox users, the preferred colour scheme is autodetected based on your operating system's colour scheme. Here's the caniuse.com support table, which should always be up-to-date: 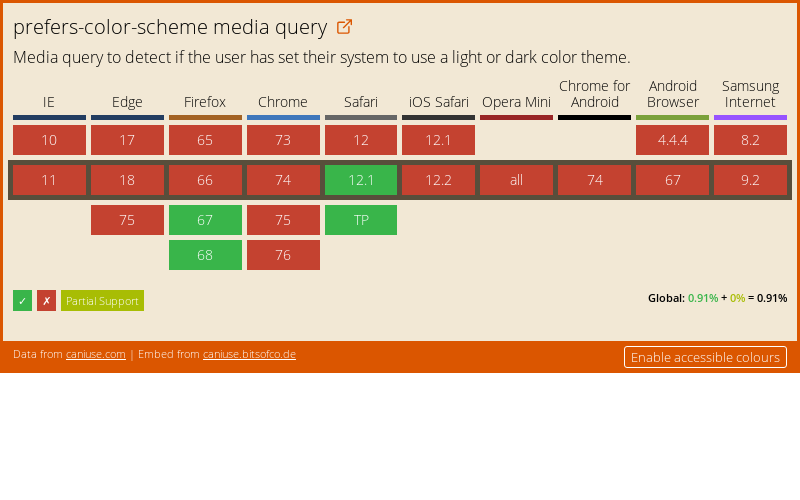 If this doesn't work correctly for some reason (like it didn't for me on Ubuntu with the Unity Desktop - apparently it's based on the GTK theme on Ubuntu), then you can set it manually in about:config. Create a new integer value called ui.systemUsesDarkTheme, and set it to 1.

If you accidentally create a string by mistake, you'll need to close Firefox, find your profile folder, and edit prefs.js to force-change it, as about:config isn't capable of deleting or altering configuration directive types at this time (yep, I ran into this one!).

Making use of CSS Properties

This way, you can keep all the 'settings' that you might want to change later at the beginning of your CSS files, which makes it easy to add support for dark mode later.

I know that I'm going to be investigating adding support to my website at some point soon (stay tuned for that!).

Found this interesting? Got a cool resource to aid in colour scheme design? Found another great CSS feature? Comment below!

(Source: The header of Mozilla's Firefox grid inspector landing page. Mozilla neither endorse this blog post nor probably know that it exists :P)

You may or may not have heard about it by now, but browsers now have support for a new feature of CSS - the Grid. I'd argue that it's the single greatest addition to CSS since it was created, and to that end I wanted to post about it here.

First though, let's look at where we've been, as it will help us understand what's so great about the new grid specification.

In the days of CSS 2, the venerable HTML <table> was the de-facto method for laying out your website - though some websites would use a frameset instead. This worked, but it wasn't very flexible. It also sort of 'abused' the HTML <table> - as a <table> is meant to display data, not provide a tool for layout purposes.

Curiously, I found some educational courses called this an 'advanced' technique for building a website - I certainly wouldn't want a website laid out in a table!

To solve this, we got the float property. With this, we could get things to sit side by side - without having to use a table! This was much better than before, but still not very flexible.

Next up came the flexbox - This is like a sort of 1-dimensional grid - allowing you to set out your content in multiple nested rows or columns. It's certainly worth taking the time to learn, as it's very useful for things like spacing the items in a navigation bar out evenly, for example.

This brings us to the Grid. Basically, it's a 2-dimensional flexbox, but with some added extra features. It's probably best explained with an example image:

The above is a pair of screenshots of a little project of mine (hint: it's related to this) with Firefox's Grid Inspector turned on. As you can see on the left, I can split the page up into multiple discrete parts, and assign different elements to each one. This is known as an explicit grid.

On the right, however, I have simply told it that I want 2 columns, each row must be at least 10em high, and that there should be a 1em gap between cells - and it has worked out that it needs 2 rows in order for every element to have a place. This is known as an implicit grid.

Together, they form a powerful framework for laying out a page. Gone are the days of having a million container elements all over the place confusing things - it is now possible to lay out a webpage with a beautifully flat HTML structure. 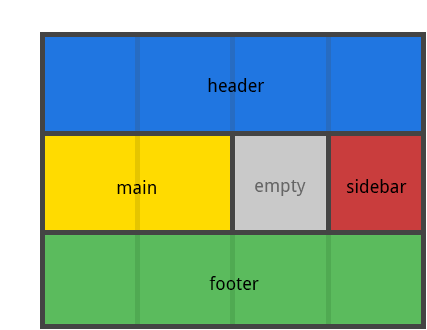 (Source: A Complete Guide to Grid on CSS Tricks)

If you're interested in creating a website for your next project, I encourage you to investigate the CSS Grid to layout your page. With browser support like this:

Can I Use css-grid? Data on support for the css-grid feature across the major browsers from caniuse.com.

(Can I Use Embed from caniuse.bitsofco.de)

...there's really no reason not to use it! To get started, I'd recommend checking out CSS Tricks' A Complete Guide to Grid. It contains everything you need to know. If you prefer a more example-driven approach, then Grid by Example also provide a fairly comprehensive view.

(Found this useful? Got a brilliant resource not listed here? Found something even better? Comment below!)

Recently someone mentioned that they knew someone else who had just brought a duvet cover that has "Huge purple flowers" on it. This gave me a most interesting mental picture - and I recreated in Inkscape (which has just been updated!) for you to see - the result is shown above. Note that those plants would be at least 3 times your size.

Anyway, I also learned that you can mix SVG with CSS (and Javascript, but I haven't got to playing with that yet). as a test, I created a quick square in Inkscape and then opened the resulting file up in my favourite text editor and plugged in some CSS animations. This is what I came up with:

The square above is actually black and set to have a low opacity, to it sets on the colour anything that is behind it. It is also done in percentages, so you can set the width and height of the containing <img /> tag and it should scale accordingly.

I might do some more of this in the future - it looks to me like a wonderful way to create a nice little self contained widget that you can use anywhere.

I made a spotlight demonstration using (almost) pure CSS!

A little bit of javascript is used to make the spotlight follow the mouse. You can also click through the layer in from of everything that makes the spotlight work because of the pointer-events: none; CSS styling rule.

It can be found below.