Document your network infrastructure with a wiki 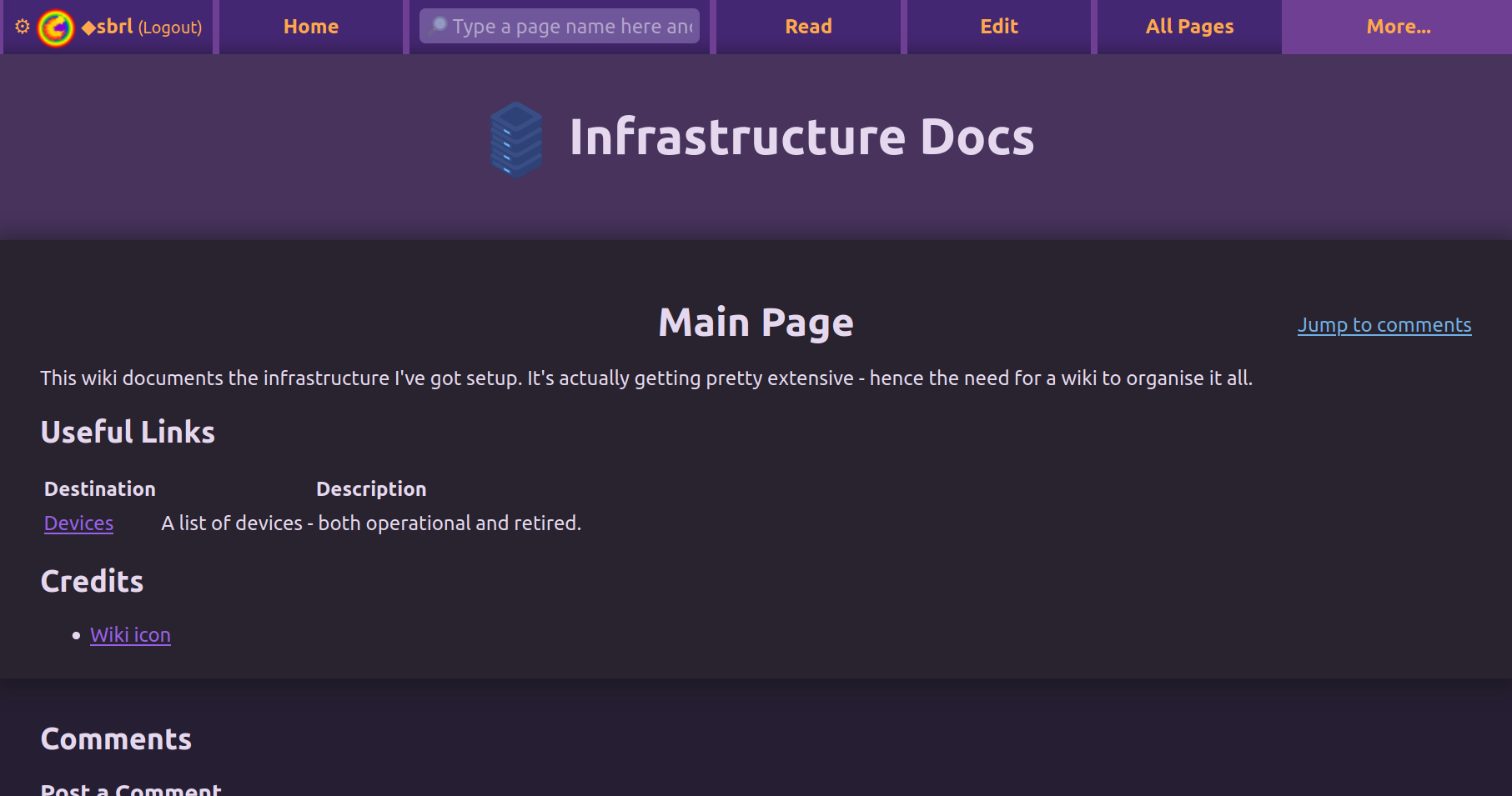 Recently, I've realised that I actually manage quite an extensive network of interconnected devices. Some of them depend on each other in a non-obvious fashion, so after reading a comment on Reddit I decided to begin the process of documenting it all on a wiki.

If you've followed this blog for a while, then you'll probably know that I'm the author of a wiki engine called Pepperminty Wiki. If you're wondering, I'm still working away at it on and off - and have no plans to abandon it any time soon. After all, I have multiple instances of it setup - so I've got more reasons than 1 to keep developing it!

Anyway, I've recently setup a new instance of it to document the network infrastructure I maintain and manage. I'm currently going for 1 page per device, with sub-pages for the services they host. I tried putting the services under sub-headings on each device's page, but it quickly got cluttered and difficult to sort through.

Even if you just manage a Raspberry Pi acting as a server (I've got several of these myself actually), I do recommend looking into it. You'll save yourself so much time when asking questions like "what does this do?", "how does that work again?", and "where was it that I put the configuration file for that?".....

It's almost as if I'm speaking from experience :P

Don't forget to avoid putting passwords in a wiki though - as tempting as it sounds. As I recommend in my earlier post, Keepass 2 is my password manager of choice for that.

I might be a bit biased, but I can thoroughly recommend Pepperminty Wiki for this - and many other - purposes. If there's something missing, then don't hesitate to open an issue and I'll do my best to help you out :-)

Found this useful? Got different way you document stuff? Comment below! It really helps motivate me to write and program more.

GlidingSquirrel is now on NuGet with automatic API documentation!

(This post is a bit late as I'm rather under the weather.)

A while ago, I posted about a HTTP/1.0 server library I'd written in C♯ for a challenge. One thing led to another, and I've now ended up adding support for HTTP/1.1, WebSockets, and more....

While these enhancements have been driven mainly by a certain project of mine that keeps stealing all of my attention, they've been fun to add - and now that I've (finally!) worked out how to package it as a NuGet package, it's available on NuGet for everyone to use, under the Mozilla Public License 2.0!

Caution should be advised though, as I've not thoroughly tested it yet to weed out the slew of bugs and vulnerabilities I'm sure are hiding in there somewhere - it's designed mainly to sit behind a reverse-proxy such as Nginx (not that's it's any excuse, I know!) - and also I don't have a good set of test cases I can check it against (I thought for sure there would be at least one test suite out there for HTTP servers, considering the age of the protocol, but apparently not!).

With that out of the way, specifying dependencies didn't turn out to be that hard, actually. Here's the extra bit I added to the .nuspec file to specify the GlidingSquirrel's dependencies:

The above goes inside the <metadata> element. If you're curious about what this strange .nuspec file is and it's format, I've blogged about it a while back when I figured out how to package my TeleConsole Client - in which I explain my findings and how you can do it yourself too!

I've still not figured out the strange $version$ and $description$ things that are supposed to reference the appropriate values in the .csproj file (if you know how those work, please leave a comment below, as I'd love to know!) - as it keeps telling me that <description> cannot be empty.....

In addition to packaging it and putting it up on NuGet, I've also taken a look at automatic documentation generation. For a while I've been painstakingly documenting the entire project with intellisense comments for especially this purpose - which I'm glad I started early, as it's been a real pain and taken a rather decent chunk of time to do.

Anyway, with the last of the intellisense comments finished today, I set about generating automatic documentation - which turned out to be a surprisingly difficult thing to achieve.

I found a few other options too, but they were either Windows-only, or commercial offerings that I can't justify using for an open-source project.

When I was about to give up the search for the day, I stumbled across this page on generating documentation by the mono project, who just happen to be the ones behind mono, the cross-platform .NET runtime that runs on Linux, macOS, and, of course, Windows. They're also the ones who have built mcs, the C♯ compiler that compliments the mono runtime.

Apparently, they've also built a documentation generation that has the ability to export to HTML. While it's certainly nothing fancy, it does look like you've all the power you need at your fingertips to customise the look and feel by tweaking the XSLT stylesheet it renders with, should you need it.

After a bit of research, I found this pair of commands to build the documentation for me quite nicely:

The first command builds the multi-page XML tree from the XML documentation generated during the build process (make sure the "Generate xml documentation" option is ticked in the project build options!), and the second one transforms that into HTML that you can view in your browser.

With the commands figured out, I set about including it in my build process. Here's what I came up with:

This outputs the documentation to the docs/ folder in the root of the solution. If you're a bit confused as to how to utilise this in your own project, then perhaps the Untangling MSBuild post I wrote to figure out how MSBuild works can help! You can view the GlidingSquirrel's automatically-generated documentation here. It's nothing fancy (yet), but it certainly does the job. I'll have to look into prettifying it later!